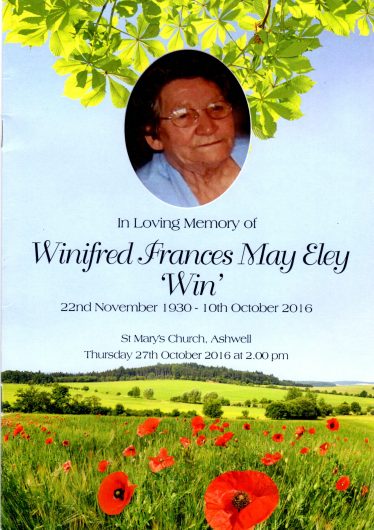 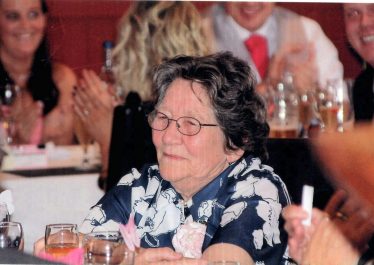 Winifred Frances May Eley (Muncey) ‘Win’ was born in Kneesworth, Cambridgeshire on 22 November 1930 the youngest of 11 children. Growing up in Kneesworth she attended Bassingbourn School leaving at the age of 14, which was the norm then.  Following education Win went into service, later working at the Anglia Match Factory in Letchworth before joining Woolworths.

During the war there were American and Australian airmen staying in the village and they brought many treats which were not available in our shops, such as chocolate and sweets – Win was always fond of chocolate!

Win met Antony Eley ‘Tony’ when he was on leave in 1948 marrying at Bassingbourn in 1950.  Tony was an Ashwell lad, when Win and Tony married they moved in with Tony’s parents in Gardiners Lane.  This was to be her home for the next 18 years and where the first four of her children were born, Jacqueline, David, Frances and Margaret, moving to 104 Station Road in 1968, where Richard was born.

Holidays and animals were always important to Win.  Some early holidays were spent with the family in a small chalet by the dunes in Hemsby and for pets there were a long string of cats and dogs.  Win enjoyed long walks with her beloved dog ‘Chas’.  Chas gave her a reason to get up and get out;  she met other dog walkers doing this.  Win walked everywhere with Chas, her house keys firmly pinned to her clothes because she was well known for locking herself out of her own house!

Win worked on the land to add to the family finances, in the summer it was pea and soft fruit picking, in the autumn potatoes and Brussels, she was often accompanied by family members.

Tony worked on the railway until his untimely death;  Win was just 46 years old when he died.  As the widow of a railway man holidays were available for Win and Richard, making many new friends with other widows and their families.  Even when her own children were grown up, Win would go on these holidays to support the other Mums.

In 2003 Win moved to Moss Cottages, Hodwell, here she was able to be with good friends Dora, Mary and Janet, who she went on many holidays with.

Win was a quiet, happy, non-materialistic lady who never asked for much, apart from a Sunday dinner.  When going from one family member to another, she was never known to turn down the offer of a second helping and always made sure she finished the lot!

She was well known around Ashwell, doing much of her shopping in the village and enjoyed the local clubs and organisations.  The over 60’s was a favourite where she enjoyed meeting friends, playing cards, dominoes, bingo and going out on trips.

Win was very self-sufficient rarely relying on anyone to look after or do anything for her.  She was at her happiest spending time with her family and friends and really enjoyed time with her great grandchildren.

For the last five years, Win struggled with dementia finally moving in to a residential home.  Over time she deteriorated and didn’t recognise her family;  fortunately she was very happy at the home, a wonderful place, full of lovely carers who looked after Win becoming like her family.

They were amazing people, the family are truly grateful to all the staff that looked after Win.