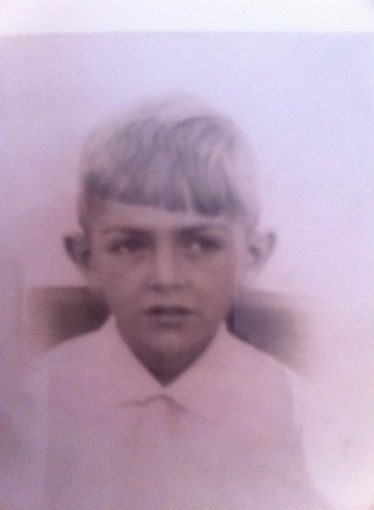 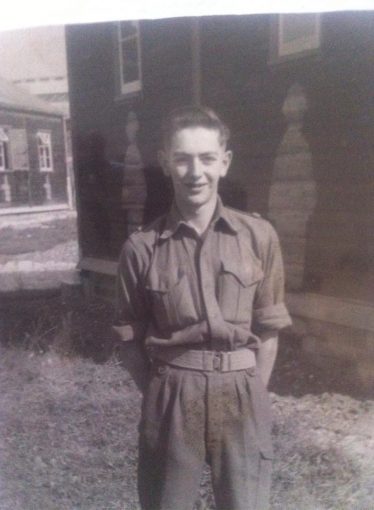 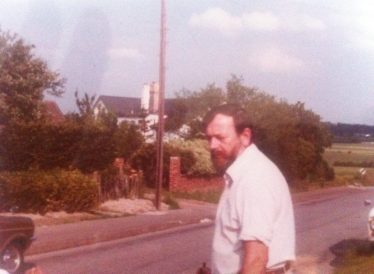 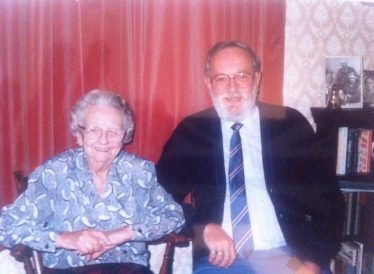 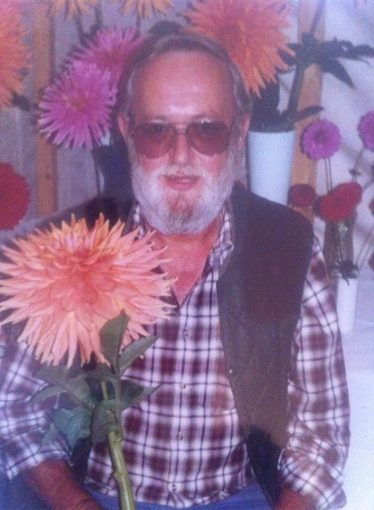 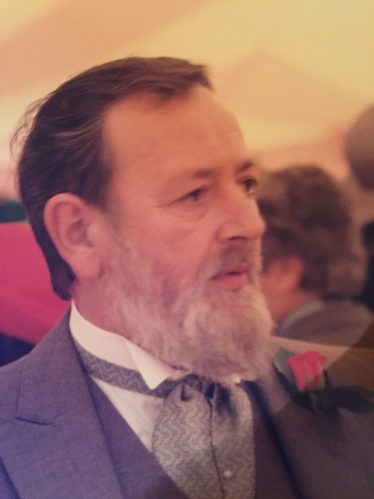 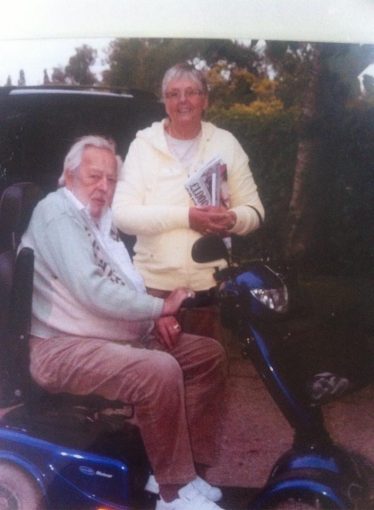 Mick was born at Mount Pleasant, Ashwell on 11th May 1935, the middle child of Gladys and Bill Revels and died 28th November 2015 in The Lister Hospital after a long illness.

The house at Mouint Pleasant was a two up two down terraced house, with no bathroom, no inside water and no electricity. We shared a toilet and an outside tap with our neighbours ‘The Pickings’.

During the war mum had two evacuees staying, we often wondered how she coped and I was only a baby, so how and where we all slept is a mystery. We lived there until I was 11 when we moved to Station Road. We hadn’t been at Station Road very long when Jeff Picking moved in next door and his son still lives there today.   Yvonne Thompson

The following is taken from Mick’s eulogy written and read by his sister Yvonne Thompson:

Sister Sheila was unable to attend but she sent a lovely message which was read to everyone at both the crematorium and the thanksgiving for life service held at Ashwell United Reformed Church.

‘Mick made today relatively easy for us to arrange by leaving clear instructions as to what he wanted. We have managed to fulfil most of his wishes but there were two we couldn’t.

Being a bit of a prankster he wanted me to put a notice in the press saying local millionaire dies, I couldn’t do this as it had legal implications, sorry mate. The other he had this little gadget which lets of the sound of someone breaking wind. He wanted us to put it in his coffin and let it off. After much deliberation we felt that was also a wish we couldn’t comply with, however, don’t be surprised if you hear it go off at least once during the wake!’

My brother Mick also known as Todd or Toddy,  what can I say about him; he was a man with many faces.  He could be a bully, I remember when I was about five he locked me in the chicken coup and the hens flew up at me. I love to see birds of all sorts but to this day I can’t bear it when they fly near me.

Then when finding my feet as a teenager he would come flying down the village on his bike and shout at me to go home or he would smack me round the ear.

As a youngster he would often get into mischief usually with Billy Worboys and PC Legg, some of you will remember him he used to clip his ear and send him home, PC Legg would tell mum or dad then he would cop another cuff.

He could be very protective, he was allowed to play the big brother and give me what for but if anyone else tried he would soon jump on them.

Do you remember the old radios with the glass batteries? We used to have to take them to Turners garage for recharging.  He had to take me with him, I so wanted to carry it so he let me guess what I dropped it and it broke and he almost chopped the top of his thumb off on the glass. We went home and mum was cross but he never let on that it was me who dropped it.

When he left school he worked in a garage in Baldock until it was time for National Service he was in the army, Reme, and served in Malaya and Germany. On leaving the army he worked for a good many years for R White as a delivery driver. He often used to take my son Glen and my daughter Heather with him. Mum would pack them up some sandwiches and off they went in the lorry; they loved to go with uncle Mick.

Glen’s wife told me quite recently that Glen thought uncle Mick was more of a father to him than his own dad when he was a lot younger.

He was a participant, he played in the village football team, if I remember correctly he wasn’t very good at it, but you could be sure if he couldn’t get the ball he got the opponent.

I can’t remember him playing cricket not sure if he did. Byron Searle reminded me of his love of darts and it wasn’t until we were clearing his flat at Wolverley House that I realised just how good a player he was, there were literally loads of trophies.

He was very fond of attending the shoot with his dog Shandy and was very proud of the way Shandy used to retrieve the birds. He also enjoyed fishing. He also enjoyed his bowls both as a young man and in his older years as a member of steeple Morden bowls club.

He was kind and caring. My sister and I owe him a great deal of gratitude for looking after our mum and dad in their old age. He also made sure that dad’s sister, Gladys Auburn, who lived at Wolverley was okay, getting her shopping, calling in on her, hardly a Sunday went by that he didn’t pick her up to take her to mum’s for Sunday dinner.

He wasn’t very good at expressing his feelings and never very touchy feely but he thought the world of his nephews and nieces.

He didn’t get to see much of Shelia’s boys from their teenage to adult years but there was never a Sunday, he used to call me every Sunday at 12.00, that he didn’t ask for news of Canada.

Shelia’s son John recently won an Emmy Award for his camera work and he said ‘the old boy done well for himself’.  Neil, Shelia’s other son, is a keen horseman and has also done well;  Mick was very proud of him too.

Sara was probably the closest of my sister’s children she used to come over a lot in her teenage years and early twenties. She used to love visiting mum and going out with uncle Mick. She has fond memories of the Three Tuns in Guilden Morden, often referred to as ‘open all hours’.

My three children saw much more of Mick. He was godfather to my eldest son Glen and was very proud of him and showed great concern when he was serving in the Navy, both in the Falklands and Gulf wars.

Glen’s job now takes him abroad and although he isn’t here today I know he will be thinking of him, he is represented today by his lovely wife Sue and their son Lee.

Glen’s daughter Carly will be thinking of us all , she has a young family and is currently with her husband and children visiting his parents for a few days.

He loved Heather and always had something to say to her. Heather had one of her friends to stay at Mums once, Joanne, he used to wind her up.

My youngest, Richard, was the apple of his eye, this stems from when my husband left us for a new life. Glen and Heather were going through the stroppy teenage years and Glen left shortly after to start his career in the Navy, but Richard was only nine and Mick felt really sad for him, sought of took him under his wing. Richard recently referred to him as ‘a second father figure, a stubborn uncle and a best friend’.

Stubborn, he sure was that too, very self reliant, very independent and not averse to speaking his mind and fighting his corner. He caused mayhem at Wolverley House in his fight for Sky TV; he loved his sports, football the Arsenal, speedway and dog racing to mention a few, all of which are on Sky TV. He had the media on his case and finally won the battle. So, thanks to Mick, other residents can now enjoy more TV channels if they wish.

Returning to family, which was always most important to him. He never married although he came close several times, always the best man never the groom.

There are still descendants of the Revels family in Ashwell but I think Mick was the last with surname. The name will linger on as we have two Revels, my grandfather’s brothers remembered on the war memorial.

Mick donated a monkey puzzle tree to the village garden in memory of our mum and dad , with a small plaque. Sadly it had to be removed. He was very upset about this and quite angry too. I had occasion to speak to Liz Moynihan shortly after he died as she had written a nice letter to him regarding the resiting of the tree.

Liz had been to visit him earlier to explain the thinking behind moving the tree and what they intended to do with it. She sure experienced two sides of Mick, he said his piece in no uncertain terms but as she left he gave her a donation towards the replacement shrub they wanted to plant.

That just sums up my brother. He was extremely generous not only with his money but also with his time. He helped set up and run the over 60s club. He helped look after the fishing moat in Guilden Mordern. He helped at the bowls club mowing the greens and cutting the hedges, Kevin told me he had bought them a new hedge cutter as the old one was pretty useless. He also contributed to the village garden with bags of fertiliser.

He saved pound coins in the old 35mm film pots for his great nephews, he had a lot of pleasure watching them sitting on the floor sharing it out. Took them a while to realise there were the same number of coins in each pot – that made him smile.

The highlight of this year (2015) was his 80th birthday. Glen turned up unexpectedly with his son and daughter and their children, bringing with them a big 80th birthday cake.

He hadn’t seen Carly and Lee for quite some time and although he had seen many photographs he had never met his great, great nephews and nieces. He was thrilled to bits and for sure that day he had something in his eye that caused a tear or two of sheer joy.

There is much more that could be said and we all have our memories good and not so good but I think the one most of us will share is of him sitting in ‘his pub of the moment’, eye on the door waiting to see who came in. Then you would hear him say ‘what you having boy’, or by name or sometimes someone would come in and he would just nod and say ‘I will get that landlord’.

True to form it is his wish that you all join us for a drink and a bite to eat at the Rose and Crown at the end of this lovely service of thanksgiving for Mick, brother, uncle, cousin and friend.  Yvonne