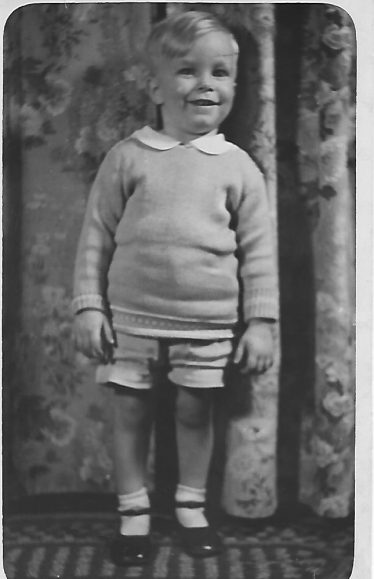 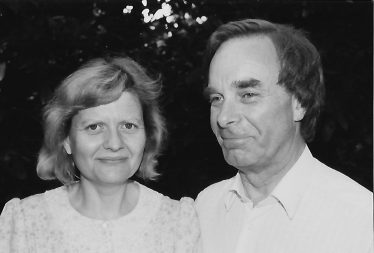 David Harold Grossman was born in Woolwich on 5th September 1933 to parents Harold and Mary.  Harold was in the Royal Electrical and Mechanical Engineers, working at the Woolwich Arsenal.  Shortly afterwards, Harold was posted to Hong Kong, returning to England when David was five.  David’s childhood was spent living in various places where his father was based.  During the war years he lived in Stirling, where he enjoyed being in the church choir and spending days in the countryside.  He also lived in Brussels and Hanover and in different parts of England.  This gave him many new experiences but meant that he attended many different schools.

David spent his National Service in the Royal Air Force where he was allocated to work in accounts.  He recalled spending weekends desperately trying to balance the books, as he had no aptitude for figures.  At this time, he was found to be colour blind, which explained his frequent miss-matching of socks and on one occasion going to church wearing one brown and one black shoe.

Teacher of the Deaf

David married and had two daughters, Susan and Louisa.  He was close to the children, having them to stay at weekends and in the school holidays after the marriage ended.  He took a great interest in their education and was proud of their achievements at university and in their chosen careers.

He was married to Mavis for 33 years and, in spite of her long periods of ill health, they were happy years.   David was a constant source of support and could not do more to help her in every way.

David was a quiet, private man.  After retirement he worked for the Citizens Advice Bureau.  He enjoyed reading and visiting National Trust and English Heritage properties.  He liked classical music, particularly Elgar and Tchaikovsky, and started each day with Radio 4.  He had two walks around the village each day.  On his return he would often comment on the number of “good morning” greetings he had exchanged saying, “What a friendly place Ashwell is.”

David’s faith was important to him.  He worshipped at St Mary’s Ashwell and also attended the Ashwell United Reformed Church with Mavis.  He died on 19th October 2018.  Many people have spoken of David as kind and caring.  As his cardiologist and others have said of him, “He was such a lovely man.”

Let us be grateful to God for the life of David.

A tribute written by a work colleague:

It is impossible to distil a man’s working life into five minutes.  I’ve known David since 1955, the year we both trained at Manchester as teachers of the deaf.

The deaf world of education is small but complicated with everyone thinking they know the answer to its complicated problems.  In looking back on David’s professional life one realizes how clever he was in looking at the overall picture of the deaf world.

Sheffield was an outstanding school of its time.  A demonstration school for Manchester from there David must have realized that clever, well taught hearing impaired children can achieve academically superbly – reading and discussing Shakespeare.

Hertfordshire was a renowned educational authority, Newsom and all that.  It would have been the time when the peripatetic service was developing and units opening in mainstream schools.  David would have started and developed all this in his new authority BUT in Hertfordshire profoundly deaf children would have to be educated “out county” going to long established schools in other authorities.

When they returned to Hertfordshire David realized they could not communicate with anyone unless a social worker was present and able to sign.

David and his amazing colleague, Francis Hodge, then planned to build a school for deaf children in Hertfordshire using “other methods besides the oral method.”

Planning such a school at that time must have taken courage and perseverance.  We know David travelled, at least, to Sweden, Germany and Holland to view systems and buildings in those countries.  Meanwhile Hertfordshire’s hearing impaired children were kept in county to form the nucleus of the new school.

To show how different David’s teaching ideas were the three teachers teaching these children before the school opened had to resign when the school actually opened as they hadn’t realised what “other methods besides the oral method” actually meant – it was a revolutionary project at that time.

Meanwhile the peripatetic service was being developed steadily, continuous training for teachers of the deaf.  The best hearing aids then available were provided – David would always take on the negotiating with the people who controlled the purse strings – he was amazingly good at this.

When Heathlands School finally decided to use signing as the other method from the oral method David’s line manager, Francis Hodge, asked me if my colleagues would ever speak to me again.  How would she know about the arguments – endless arguments – in the deaf world except through David?

Heathlands Primary School children were due to move into a secondary school in Buckinghamshire but on visiting the school Ray Williams, who had been briefed by David, realized the standard of education in Buckinghamshire was way too low so other arrangements were made.

David’s briefing of his colleagues always seemed to be so positive and effective.  When Heathlands started signing as its main means of communication it was realized that deaf people who signed would be needed.  The first deaf person appointed came under Margaret Thatcher’s Job Creation Scheme which lasted a year.  At the end of the year money had to be found for her salary.  David dealt with yet another department successfully and Velda’s job continued.

Working with David one realized more and more that he was quite clear in where he was going.  He realized the process of change and innovation.  In due course he took over all areas of special needs so that all the Heads would go to Offley and declare they had no idea what it was about, however next time they found they had been maneuvered into change and knew exactly what was required.

In my career I worked with four different authorities before working in Hertfordshire.  Getting equipment and staff was always a great fight.  In Hertfordshire David did all that fighting for the service and at his peak in the eighties Hertfordshire ran the best all round service for the hearing impaired in the country.

The deaf have no idea how much one person quietly did for them.  As my colleague David Scott said of him, “A man before his time.”

David was a man in the right place at the right time.  Thank you David from so many of us.