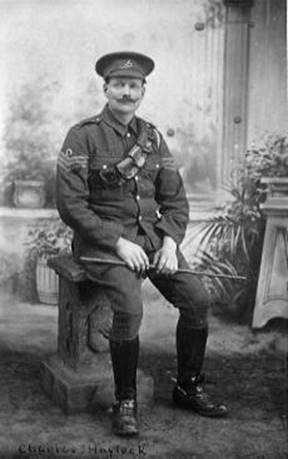 Charles Haylock was born on 1 July 1868 in Ashwell, Hertfordshire, his father, Joseph, was a Maltster at the brewery, his mother was Emily Austin, they lived in Mill Street, Ashwell. He had 11 brothers and 4 sisters.

However as the photo shows he was a Farrier Sergeant in the Royal Field Artillery (RFA) 1st Herts Yeomanry serving from 14 Oct 1914 – 1918.  It would appear he did not serve abroad but was responsible for the care and shoeing of horses in England quite a responsible position.

He and Agneta lived in Queens Road, Royston where he continued his occupation as a Blacksmith

Charles died in December 1956 in Ashwell, Hertfordshire, at the age of 88.