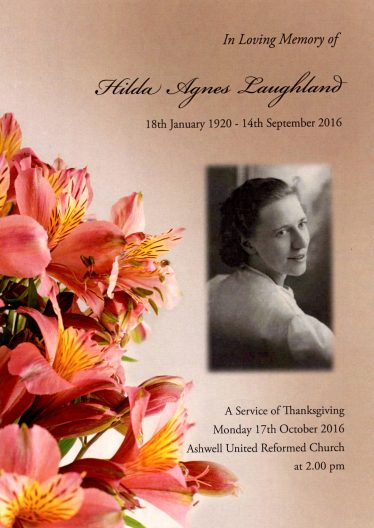 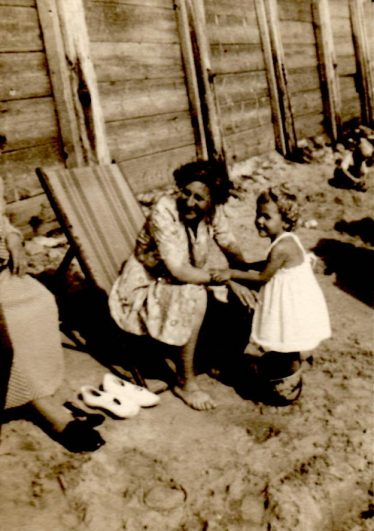 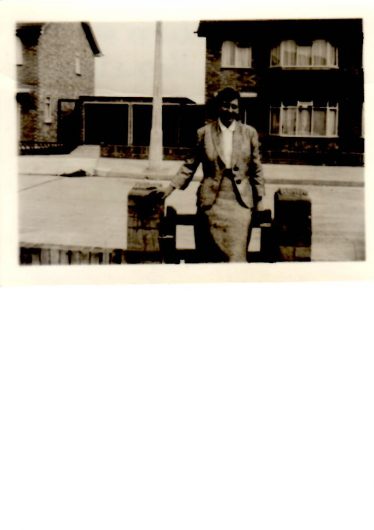 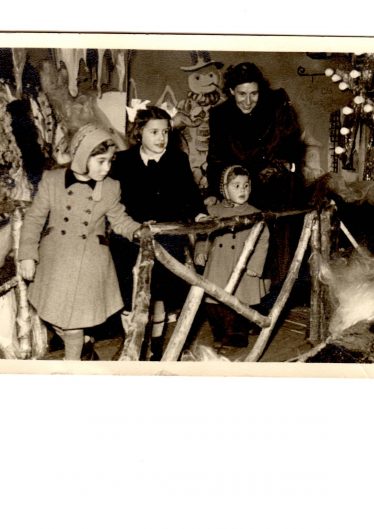 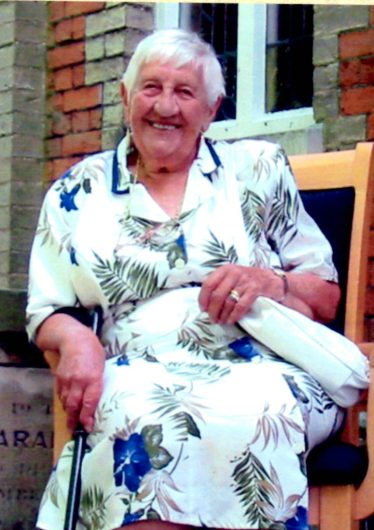 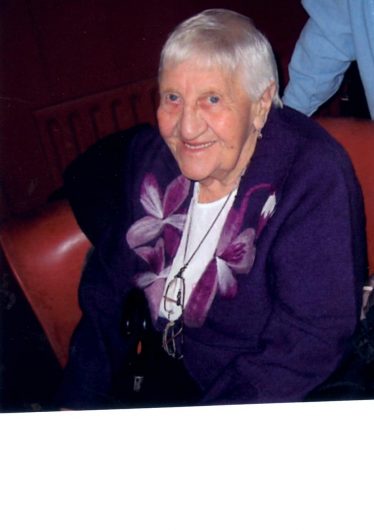 Hilda Agnes Davies was born 18 January 1920, she had an older sister, Gertrude and brother Arthur, they lived in London later moving to Dagenham.

Hilda’s war service was as a conductress on a London bus, a “Clippie”, like thousands of people during that difficult time Hilda just got on with the job regardless of the air raids and her personal safety.  Being a “Clippie” suited her personality and must have encouraged her passengers with her cheery chatter and ready smile.

The family moved to a new estate in rural Debden, Essex forming strong lifelong friendships.  For the day of the Coronation Hilda helped to organize a giant picnic involving the entire street when, of course, Hilda made the cakes.

Hilda had a strong faith and wherever she lived there had to be a church that she could attend.  The Methodist Church in Debden was 20-30 minutes walk from home but Hilda took Carol and Sue every Sunday;  afterwards Ministers and Deaconesses would share lunch and a cup of tea with parishioners and sometimes with them.

Hilda and Jim enjoyed visiting one of their special places, the Isle of Arran on the west coast of Scotland, “being on the Gulf Stream even the rain was warm” – or so they told Carol and Sue.

Jim and Hilda bought a small confectioners in Loughton, Essex, Jim had very poor eyesight and his hearing was not good.  It fell upon Hilda to learn to drive, not the norm in those days, but this enabled the family to arrange regular visits to her sister or brother and have many other adventures.  However with Jim as the navigator many a wrong turn was taken.

When Hilda and Jim retired they moved to Upper Caldecote, the criteria still the same – a church for Hilda, a library for Jim and a bus service nearby.

While Jim could still travel Hilda and Jim were able to enjoy a number of trips to the Continent including Munich, Venice, the Italian Dolomities, Salzburg, the Austrian lakes and especially Hallstatt which has special significance to the family.

In 1994 Jim died and Hilda’s life changed; with Jim’s disabilities Hilda had totally dedicated her life to make Jim’s life as comfortable as humanly possible, an example of Hilda’s Christianity in it’s purest form; now she was able to freely visit Carol and her family who took her travelling around Europe.

Her old neighbour, John, had emigrated to Brisbane and that was the beginning of trips to Australia. On the first occasion Carol and Bob were able to escort Hilda to Australia. Bob especially remembers everyone smiling as one day watching a wild parrot fly overhead, Hilda commented “Oh look, somebody must have left his cage door open!”

In December1999 and January 2000 John and Hilda both turned 80, Sue and Les joined them to celebrate with the friends Hilda had been introduced to.  John played the piano, Hilda sang and everyone joined in.  She also travelled to New Zealand with John touring some of the North Island.

By this time Hilda was living in Hodwell, Ashwell.  Still able to get around by herself she loved the warmth of the village and the people she met.  The Ashwell URC was just across the road; a friendly and helpful post office, the companionship of the Horticultural Club, Senior Citizens, WI, a great Doctor’s practice and a caring Pharmacist – and all the cake making she could ask for!

In about 2007 the AURC were considering how to refurbish the hall which was in a very poor condition.  One day after morning worship Hilda said to Jackie (Jackie Embury – Church Elder) “You know you can get grants” this planted the seed and in 2009 the hall was completed with grants from NHDC Community Fund and WREN.  So thanks to Hilda’s encouragement we now have a very fine hall which is well used by village organisations and for private use.  Jackie Embury