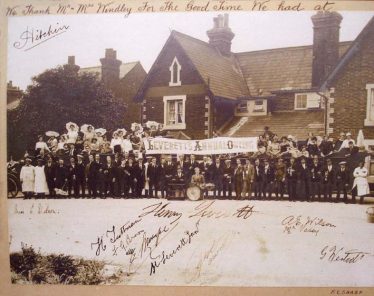 zoom
"Leverett's Annual Outing." It was taken at the rear of the then Leicester Railway Inn, now the Nightingale, in Nightingale Road, Hitchin. Date? Late twenties, I think.
Hitchin Historic society

The village owes its first bus service to a London hat manufacturer. Cockney Henry Leverett, wearing a cloth cap and neckerchief, bought the strange white house on Ashwell Street at the top of Bear Lane, which has been used as a factory of various kinds for some years now. I believe it was built as a retirement home for Fred Bailey, founder of the Ashwell firm of F.J. Bailey & Co., Builders, timber merchants, lime burners and undertakers.

When Henry Leverett moved in, in the late twenties, there were the usual village rumours. Something mysterious was going on; two fierce chow dogs patrolled the house and grounds day and night. But after a time, Henry made himself known to the regulars at the Rose & Crown and following a few rounds of drinks, he didn’t seem a bad sort of chap; in fact he made it known that he was building a bus! In due course, the strange vehicle emerged – a mixture of polished aluminium and red paint. A sign above the windscreen stated Ye Olde Tin Can. The bus was fitted out with about fourteen red wickerwork seats, with red leather cushions.

A board on the slaughterhouse of T.D. Dennis in High Street and a notice in chalk informed Ashwell that ‘Ye Olde Tin Can’ would leave at 5.30 p.m. on Sundays bound for Bedford, Henlow and Hitchin, returning about 10.30 p.m.

This was soon followed by a service to London every Friday. The next step was the purchase of two Dennis coaches, which were used for seaside outings, exhibitions, shows, etc. Henry drove one coach and Bob Cole, his brother-in-law, the other. Spurred on by the success of the coach business, Henry then considered a daily bus service from Hitchin to Cambridge via Letchworth, Baldock, Ashwell, the Mordens, Royston and all the villages to Cambridge, with early morning buses for workers and a late night bus from Hitchin on Saturdays for cinemagoers. All of this came to pass.

There were very few cars in those days, so it really put sleepy old Ashwell on the map. With more buses, it was necessary to build garages and a workshop. F.J. Bailey & Co did the building work and were able to make use of a range of large window frames which had been removed during the alterations at Ashwell Bury. With extra buses, extra drivers and a mechanic were needed. To house them, two cottages were built at West End by Baileys and another pair in Back Street by W.F. Rand, another Ashwell builder.

It was not very long before one of the big bus companies cast their greedy eyes on our bus service. They threatened to run Henry off the road; he was compelled to sell out, and Ashwell lost its Cockney hat manufacturer-cum-bus proprietor.