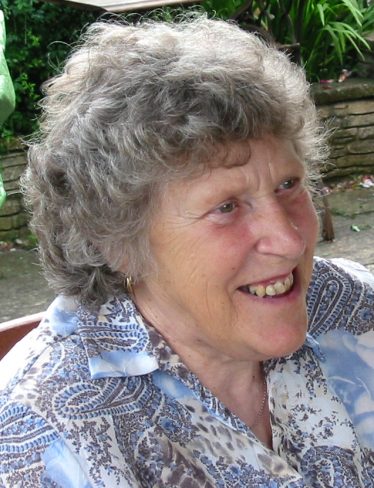 Vera was born at 3 Prospect Terrace, Back Street, Ashwell, on 17th September 1935 to Stanley and Violet Bryant.  She had three brothers, Fred, Peter and Basil, and two sisters, Molly and Janet.

Vera attended Ashwell Primary School, followed by Baldock Secondary Modern School (now Knights Templar).  She worked as a Saturday girl for Westrope’s and, on leaving school, continued working there full-time until her marriage.

Vera met her husband, Charles ‘Chuck’, who was serving as a medic in the USAF stationed at Wimpole, on a night out with a friend in The Jockey, Royston.  Vera and Chuck married at Hitchin Register Office on 14th June 1957.

Vera had never been further than Great Yarmouth so one can imagine the change that she made within the year when Chuck was posted to Turkey on the 8 June 1958 where Linda, their first daughter, was born, followed by Danette, who was born in Montana, USA.

Later Chuck was posted to Brize Norton, the girls remember that they even brought the goldfish.

Chuck’s last posting was South Carolina when he promised that on completing his 28 years service they would return to England which they did.  Chuck then worked at Chicksands the American Intelligence Base, Linda and Danette remember the great times they had there celebrating Halloween, the American Thanksgiving and Christmas

At first they lived with ‘Grandad’ in Ashwell until they got a council flat in Hopewel Road, Baldock but where delighted when they were offered a council house, 116 Station Road, back in Ashwell.

Vera was always a homemaker but had several small jobs and for a time looked after *San Carswell’s two boys, and was always there for her Mother.  Both Vera and Chuck were delighted when their grandson Jack was born on 22 July 1990, the family had happy bucket and spade holidays to Clacton and Great Yarmouth in the caravan;  even after Chuck sadly died, on 30 November 1997, Vera still went with the family.

Vera became affectionately known as Mrs Doubtfire from the comedy film with Robin Williams in the title role.

Family was everything to Vera and Chuck, especially their grandson Jack, who recently married Holly.  Vera was so pleased that Jack had found himself such a wonderful young lady and she adored her.

The year after Chuck died Vera moved to Back Street where she lovingly attended her garden, attending Ashwell URC on Sundays with sister Molly after which, in good weather, both going for a stroll around Ashwell returning home Molly would often bring out the chairs in the garden.

Vera attended Sunday School at Ashwell Congregational Church (now Ashwell URC) with her siblings and was a loyal member until ill health prevented her attending.

Unfortunately Vera’s health deteriorated so she moved to Temple Court in Baldock where she had a lovely flat but was only there about five weeks before she suffered a fall resulting in having to go into hospital.  It was Vera’s wish that if anything happened that she should not be resuscitated for as she said, “When the good Lord calls me its my time to go to be with Chuck”

A lady of courage, faith and abiding love with a great love of children;  may we all seek to live such a life of Christian faith and love, trusting in the resurrection to eternal life through our Lord Jesus Christ.  As Jesus promised there is indeed a place prepared for her in the Father’s house. Amen.

Vera died peacefully at the Lister Hospital, Stevenage, on Wednesday 19th December.  Her funeral took place on 15th January at North Hertfordshire Crematorium, Holwell, followed by a Thanksgiving Service at Ashwell United Reformed Church to celebrate her life with family and friends.

In 1985,  a few months after we had our first son (Cam) I realised that I wasn’t good at being a housewife and mother,  and was very lucky to get a job working part time from home,  for what was then International Computers Ltd.  I was advised that I’d need a childminder for 2 mornings a week,  so put an ad in the window at the side of the Post Office.

I got 2 replies,  one from the lady at No 5 Silver Street,  and the other from Vera up near the end of Station Road.  Anyone who knows where we live on Angell’s Meadow will know that No 5 Silver Street is much the more convenient,  but having been to talk to both people I chose Vera.

Very soon,  we found that I’d made a good decision in choosing Vera.  She was choc-full of common sense,  and it just worked out so well.  You probably know that Vera was very organised,  so she’d let me know if there was anything she needed,  and she taught me how to fold a nappy the America way,  so I could take one ready folded each day.

It was clear how much Cam liked going to Vera’s.   He was never good at getting up in the morning – still isn’t.   But when he was old enough and I told him it was time to get up,  he’d ask if it was a Vera morning;  if I said it was he’d be out of bed like a shot.  On other days it took ages to get him up.

When Russ came along he went as well,  so both Cam and Russ were able to enjoy the big garden and walks with Vera (and Chuck when he wasn’t working).   This was before the time that childminders had to be registered and inspected,  so health and safety rules didn’t stop them climbing trees.  Cam was allowed to dig in the garden,  and one of the trees became a tractor in Russ’s imagination.  Nowadays the Health and Safety Wallahs would have the tree cordoned off and only allow digging with plastic tools.

I have to admit that there were times when Bob or I picked them up,  and one or both of them didn’t want to come.  Vera was always very firm and insisted they had to come,  but she’d see them again soon,  and sometimes said what they’d do that day.  Despite that,  the neighbours along Station Road would hear Russ howling  “I don’t want to go home”.

A while after Zena was born,  Vera began to have back trouble.  Unfortunately, before Zee was old enough to start going there too,  Vera rang me to say that the Doctor had told her she’d have to stop doing the childminding because of her back.  I managed to get through the phone call OK,  but when I put the phone down I burst into floods of tears.   It took me about 10 minutes to stop sobbing and ring Bob to tell him,  which of course started me off again.

We were simply very lucky that Vera saw my ad in the Post Office.  I discovered about a year after Cam started going to Vera’s,  that when she saw my ad,  there was another ad for a childminder,  and Vera rang that number first.  I’ve thanked my Guardian Angel many times for making sure that person was out, and wondered who it was who had missed out!

And of course, the ongoing bonus for the Carswells is that we all have the good fortune to know Danette and Linda,  and they’ve been part of our lives all this time.  And how wonderful that Russ and especially Cam,  have such happy memories of their time with Vera.

Thankyou  Vera, you’ve added so much to our lives.