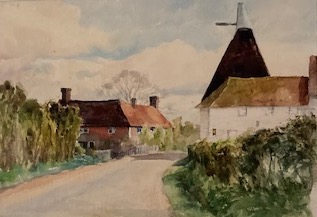 Frank Huffer was born 28 April 1885 in Ashwell, his parents were John Huffer and Emily nee Huffer, he had five siblings all living at 69 Back Street.

In 1919 Frank married Lottie Ethel Robinson 1891-1974 in Wandsworth, London.  Lottie was a typist/bookkeeper for a van and motor car builder in London and this is where they met.

Frank enjoyed painting in his spare time travelling to various villages where he captured the buildings using both watercolour and oil – two of his paintings are illustrated here, the Essex one is a watercolour and the Kent one is in oil.

In later life they moved back to Ashwell returning to the family home at 69 Back Street where they lived to the end.

Frank gave these two paintings to Ethel Sheldrick who was their next door neighbour for many years.  When Ethel died the paintings were passed to her niece Diana Shuttlewood nee Sheldrick

Frank and Lottie didn’t have a family