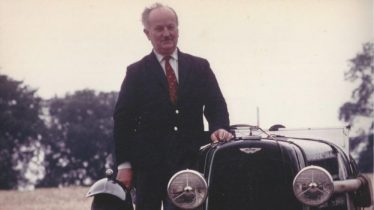 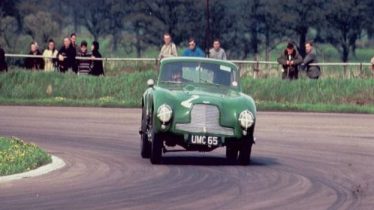 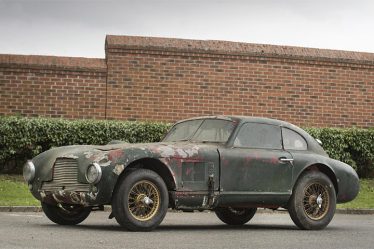 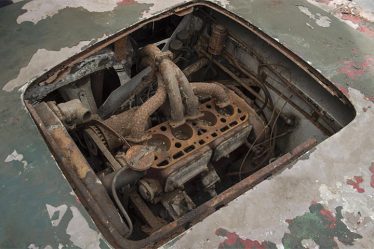 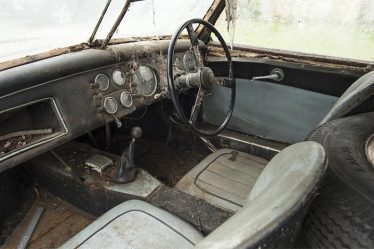 The rare DB2, which competed in the 1949 Le Mans race, was stolen in 2002 from Christopher Angell who died before the racer was recovered this year.

A £1million Aston Martin that was stolen 14 years ago is up for auction after the owner died before the car was recovered.

The rare DB2, which competed in the 1949 Le Mans race, was stolen in 2002 from owner Christopher Angell.

He died before the prototype racer was recovered by police this year in a dilapidated state at a storage facility in Holland.

The motor passed to Mr Angell’s relative Ashley Mack, who has been forced to put it up for auction because it could cost “many thousands” to have it restored.

He said: “Christopher was devastated by the theft of his car and just before he died in 2003 he was still asking ‘has that nice policeman got my car yet?’

“Even at this stage my heart will be pleased if it doesn’t sell but my head has to acknowledge that it will cost many thousands to restore.”

The vehicle is due to go under the hammer at Bonhams’ Goodwood Festival of Speed sale in West Sussex on June 27 and is expected to sell for around £1million.

It is estimated it will cost hundreds of thousands of pounds to renovate and Mr Mack is keen for the car to go to someone who is passionate about motor vehicles.

Out of three Aston Martins entered into the Le Mans endurance race, the DB2 with the registration plate UMC 65 was the only one to cross the finish line and came in at seventh place.

The green prototype, which was built as a test-bed for the later production of the DB2, was also raced in the Spa 24-hour race in the same year and finished in fifth place.

Officers travelled to Eindhoven, Holland, to seize the vehicle in April this year after it was used as a surety for a loan.

Detective Sergeant Jo Goodson said: “It was extremely satisfying. It was quite emotional because it’s a lovely car with an exceptional history.”

Bert Anton Visser, 64, and Heerke Jan Visser, 53, were convicted in 2003 of stealing the car, which was taken in July 2002 from the garden of a property off Hinxworth Road in Hinxworth, Hertfordshire.

They were released on bail by a judge at the time but failed to return for their sentencing or to hand the car over.

Both men remain at large and are still being sought by police.

History of the Aston Martin DB2

The historic Aston Martin automobile company can trace its roots all the way back to 1913, when it was first founded by Robert Bamford and Lionel Martin, however one of its most important eras came under the helm of a different man, David Brown.

In 1946, Brown, a successful industrialist, saw an ad in the newspaper offering a sports car company for sale. Upon further investigation, he found it to be none other than Aston Martin, and with the sum of £20,000 he purchased the firm, followed soon after with the acquisition of luxury automaker Lagonda.

The stage was set for a dramatic rebirth of Aston-Martin, and well… this is essentially the car that kicked it off. Built in 1949, this Aston Martin “fixed head coupe” was one of three prototypes that raced at the 24 Hours of Le Mans, and the only one to finish. It formed the basis of the new-for-1950 Aston Martin DB2 and amazingly it’s up for sale. Looking to buy? You’ll likely need a million bucks or more.

While the car’s decrepit state and cobwebbed appearance may suggest its lack of value to some, that couldn’t be farther from the truth. In 1948, upon reestablishing Aston Martin at a new facility in the English town of Feltham, David Brown commissioned the production of new racing cars. Amazingly, a hastily built prototype utilizing a four-cylinder (designed by Aston engineer Claude Hill) won the Spa 24 Hour race that year, and work began on three more prototypes for 1949.

This car was to be the second fixed head coupe of that trio. At David Brown’s request, the first was fitted with a 2.6-liter straight six engine (acquired from Lagonda) while the second and third featured Hill’s four-cylinders. When campaigned at the 1949 24 Hours of Le Mans, this car (and its 2.0-liter four-cylinder) was the only Aston Martin to finish, taking seventh overall and third in its class. Sadly, the other four-cylinder car was destroyed in an accident, which claimed the life of driver Pierre Marechal.

Shortly after Le Mans, the Lagonda-engined prototype took third place at the 1949 Spa 24 Hour race, followed by this car in fifth. To this day, it’s still said to retain its original Claude Hill four-cylinder.

After its professional racing career ended, the Aston Martin prototype was sold and competed off-and-on from 1951 through the 1960s, still returning impressive finishes. By the 1970s however, its then-owner Christopher Angell used the car less and less due to health reasons and it began to decay on his estate, awaiting a restoration that wouldn’t come. In fact, in 2002 it was stolen from his garden, thankfully recovered afterward by relatives after a botched sale attempt.

Now, the prestigious Aston Martin fixed head coupe (registration number “UMC 65”) remains in virtually untouched and almost all-original status, and is said to include a number of original spare parts, including an additional Claude Hill engine and three cylinder heads (the current one has obviously been removed).

Later this month, the rarified Aston Martin will cross the auction block at Bonhams’ Goodwood Festival of Speed sale, and it’s estimated to fetch upwards of £1 million for its pedigree. Like the looks of the DB2, the DB3, the DB4, DB5, and DB6? It all started here.

Here’s the snag though. Do you spend another million dollars restoring it, or do you keep it as is, an incredible time capsule? The purist would say keep it untouched, and to be honest… I’d have to agree.

Taken from the internet

Typed by Jackie Embury - information from Ashley Mack and the internet