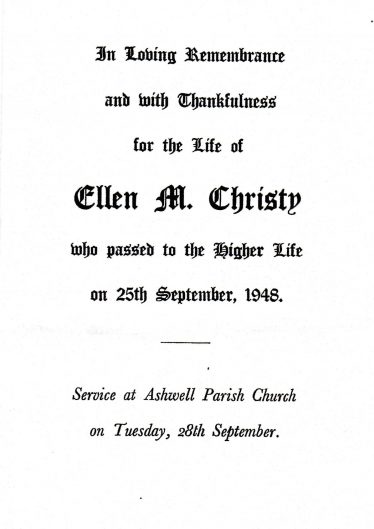 Death and Funeral of Miss Ellen M Christy. – With the death of Miss Ellen M Christy, briefly reported in our last issue, Ashwell loses one who rendered good service to her native village.  For many years postmistress of Ashwell, succeeding her father, Mr Abraham Hart Christy she retired some seven years ago, thus breaking a link with her family and the Post Office which had existed since the introduction of postal facilities for the village in the early 19th century.  She was also a partner in the old established firm of A & C Christy Ltd.  Many activities in the village claimed her interest and support, particularly the Ashwell Nursing Association, the Parochial Church Council and the Village Hall Social Council, on all of which bodies she had for many years served as a member.

The funeral took place on September 28 at St Mary’s Church, Ashwell in the presence of a large congregation.  The Rector of Ashwell, the Rev. J F B Keith conducted the service, which included the hymns “We Love the Place” and “The King of Love”.

The wreaths were from: