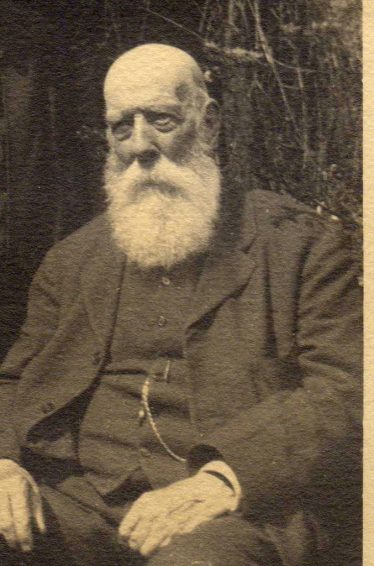 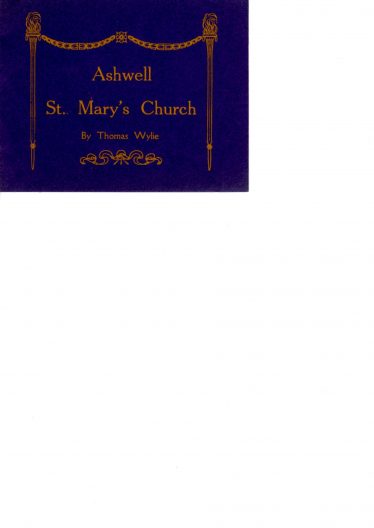 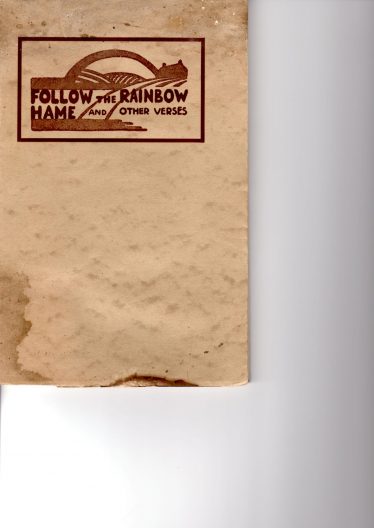 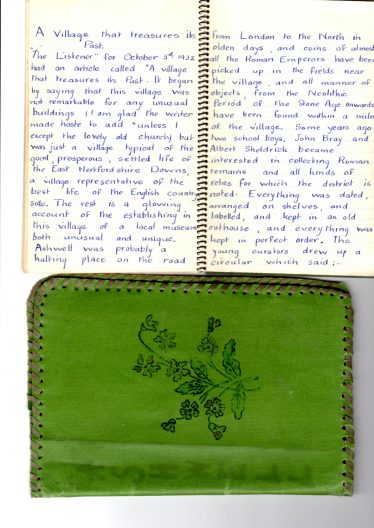 Mr Thomas Wylie who for many years farmed the Bear Farm, was not only a farmer, he was poet, musician and mystic.

Some ashen trees;   and water bubbling, – springing
Just where the chalky hillside meets the plain:
And gathered all about them, clustering, –  clinging.
The village homesteads have for ages lain.

What apparitions hover o’er the region!
Those who in long gone summers drank the well –
The men of Boadicea, and the legion
Of Caractacus from the distant fell.

What eager faces!   east and westward peering
Forth from the grim,  proud stronghold on the hill:
When fierce marauding bands the homes were nearing,
Of cruel foes, intent to storm and kill.

*And safe enclosed within the moated water,
Stood barn and yard and stable in array:
And cherished homes where grandsire, son and daughter
Securely slept by night, and dwelt by day.

Anon came messengers, with fateful story,
From lands afar, of faith and hope to be:
Of One who lived and died to bring to glory
The sons of men – The Christ of Galilee.

Ceased the dread sacrifice on Druid altar.
No more the Roman cried to Father Jove.
Forgotten by the Norseman Thor and Balder
The new white Christ had come, and life and love.

Then men arose of brain and finger crafty:
Who patient through the years upraised the shrine;
The columned aisle the nave and chancel lofty
And traceried window to the name Divine.

The cunning chisel crept along the moulding,
And fashioned into perfect curve and line,
Corbel and Arch, and intricate infolding;
Where branching mullions each with each entwine.

*High in the great east window blazed the story;
Of how the “holy blissful martyr” died,
Unyielding on the alter stairs all gory,
Faithful to Church, and to the Crucified.

High Mass resounding through the arches floated,
Billowing and echoing the aisles along;
Chanted the acolyte and priest full-throated
In stall and choir the holy evensong.

Out in the fields, men bowed in adoration,
When rang the Angelus across the plain.
And in the sheafy time, a high oblation,
Brought they in tithings to the holy men.

*Came days of peril, loud the people muttered,
Of croziered pastor, tending not the sheep.
But the bluff Tudor soon the fiat uttered,
“Cease tyrants, I my people’s safety keep.”

No longer pealed in the high roof sonorous,
The swelling Miserere Domini;
But plain in Saxon speech the simple chorus,
God of our fathers, dwelling place for me.

*No longer were the saintly relics carried
In long procession past the altar stone;
But quiet and prayerfully the people tarried,
To bow in reverence to the Holy One.

*And still the daily duty came – the ploughing,
The scattered corn that promised as it sped,
The rich ripe sheaf at merry harvest glowing,
That daily toil should give us daily bread.

Yea so beneath the church’s sacred rafter
We come for strength to war against the foe:
To purge all evil things, that so hereafter,
Bountiful blessings through our lives may flow.

Far in the ages was the fabric founded,
Yet arch and mullioned window still are fair.
Far in the past were buffetings unbounded,
that lives of peace and freedom we might heir.

*Let toiling men in honour due be holden,
Tilling and tending that the world may eat:
Seer, singer, saint, – who from the ages olden,
Have filled us with the finest of the wheat.

It draws anigh the midnight
The year is dying slow,
Along the village street and lane
The lighted windows glow.

And softly in the stillness
The bells begin to chime,
Some old world strain of
“Peace on Earth”
And happy Christmas time

But a swish of whin and heather
Trails through the clanging bells,
The cry of the whaup on the moorland,
Where the song of the burnie swells.

What can it be they are playing?
It is!  oh heart of mine!
Old friendship, love, and social joy!
World famous “Auld Lang Syne”

Arose in vision the Northland.
Its mountains capped with snow,
Each lonely dell, and mossy glen
Where the mild-eyed cattle go.

*The storied haunted hillsides,
With bracken feathered green,
The cottages and farmstead
That nestle close between.

The poets that sang to the people
The song of the common day,
The wheel and the loom, the spade and the plough
Made glorious by their lay.

But the moving hand of the ringer,
That stirred the memory so,
Stirred also thoughts of the Southern land
In times of long ago.

For here came the conquering Romans,
Silent and stark and grim,
Cohort and legion pushing along,
All making way for him.

*But by and by from the dearmland,
Came thoughts of the far off home,
The vineyards, cornfields, herds of kine,
And the olive trees of Rome.

*They drank of the sparkling water
Under the ashen shade,
And the great earth-hunger in them stirred
And they rose to the plough and the spade.

*Behind them green grew the wheat-field,
And ever the lark in the sky
Sang o’er the heads of the toiling men,
Harvest is by and by.

Saxon and Dane and Norman
Went clangouring through the land,
Fighting, spoiling, harrying all
In many a warlike band.

But ever the green of the wheat- fields,
Came with the coming year.
The springtime showers and summer flowers
Brought welcome harvest near.

For the song of the man at the ploughing
As his furrows brown slid o’er,
Was “the miller waits for the ripened wheat.
The world, for the miller’s flour”

Then arose in the land great cities,
Filled with the factory’s din,
Trading, huckstering, chaffering all,
Hurrying out and in

Gleeful and loud was the shouting
All through the eager throng,
“We are the heirs of the ages all,
Their fruits to us belong!”

Then the man in the fields smiled softly
As he tended them hour by hour,
“The miller waits for the garnered wheat,
The world for the miller’s flour.”

Oh, ringers in the belfry!
When back through all the years,
Your ringing chime sends thoughts of mine
Through laughter and through tears.

The bygone time doth ever
Sweet memories enshrine,
But the Now that rings in the flying year,
Will soon be “Auld Lang Syne.”

*Verses added from a book published by Eneas Mackay, Stirling, “Follow the Rainbow Hame and Other Verses” by Thomas Wylie