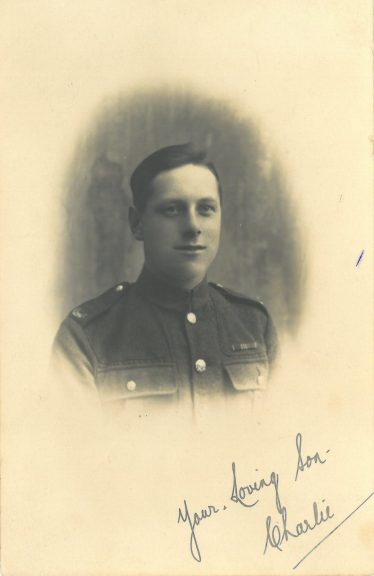 Charles enlisted into the 5th Battalion of the Bedfordshire Regiment at Hertford on 19th April 1918. His regimental number was 60527. He saw active service in France and Flanders and survived the War

Instead of taking his discharge on 5th February 1919 he re-enlisted the following day into the Gordon Highlanders at Felixstowe. He was posted to the 52nd (Graduated) Battalion, Gordon Highlanders, which was a training unit based at Catterick Camp, Yorkshire, before moving to Glencorse Camp near Edinburgh.

In early 1920 he was posted to 1st Battalion, Gordon Highlanders which was sent to Turkey on active service as that country was in a state of disorder following the collapse of the Ottoman Empire and was stationed at Tuzla on the Ismid Peninsula. This was followed by a move to Haidar Pasha near Constantinople (Istanbul) in November 1920. In November 1921 the battalion moved to Malta from where he returned to the UK at the end of May 1922 to take his discharge from the army on 4th July 1922 with an “Exemplary” character reference.

During his time with the Gordon Highlanders he was employed as a clerk in the Battalion Orderly Room. He obtained the Army Certificate of Education (Third Class) as well as a swimming proficiency certificate.

Charles survived the war, died on 13th December 1989 and is buried in Ashwell Cemetery, Hertfordshire.

Charles was awarded the British War Medal and the Victory Medal.

Charles was born on 28th February 1900 in Ashwell, only son of Robert and Anne (nee Rowling) Haylock.

Charles was a pupil at the Merchant Taylors School in Ashwell.

Charles married Gertrude Castle on 24 October 1931 and they had one daughter Mary Elizabeth.

Charles died on 13th December 1989 and is buried in Ashwell Cemetery, Hertfordshire.

Charles’s military memorabilia was sent to the Gordon Highlander’s Museum in Aberdeen by his daughter.