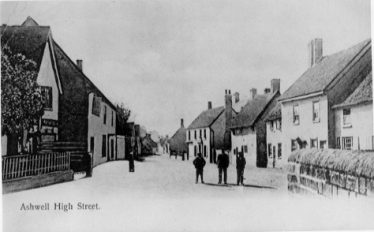 Uncle Leslie, Ann and Robin came to visit us quite often and we all had lots of fun with our cousins.  They were our only cousins other than Gillian (Gilly) and Noel who lived in South Africa.

I remember Robin as being rather shy and quiet and not very keen to join in with the chatter and laughter around the meal table.  He got a scholarship to Royal High WycombeGrammar School and it was decided he should be a boarder.

He did do well at school particularly in the Art class and went on to Harrow Art School after finishing his GCE O levels. He did some lovely paintings and drawings and Peter has a painting of a cherry tree in bloom which was very attractive.

Ann and I always got on well and had lots of fun together.  We shared a bedroom and used to be talking far into the night about clothes, makeup and boys.

Uncle Leslie and Dad used to have long conversations into the early hours, presumably about how to make the shop more successful and reminiscing about their childhood.  Dad was always in a good mood when his brother Leslie was with us and it was great to hear them laughing so much.  Uncle Leslie always bought a large box of groceries to take home which boosted the week’s takings.

Aunty Gladys Blackburn, Mum’s sister must have visited sometimes but I don’t recall any times other than she was unwell, at the end of her life.  Mum occasionally visited her sister at Brentwood for a weekend and they always went to visit their parent’s grave at Warley and also met up with “Aunty” Barbara Press, a church friend from Shenfield.

Aunty Gladys had become ill in the summer of 1955 and she wrote in a letter to Mum about having back pains and hoping it would soon get better as she was going on holiday to Switzerland in a months time.  She was diagnosed with breast cancer and had an operation fairly quickly and seemed better for a while and came to stay with us to convalesce.

We used to go for little walks down the lane towards the church and she found it difficult to walk for even a short way and her arm was swollen and painful.  She gave me a new leather shoulder bag, as she just could not carry it on her shoulder.  I think Aunty Gladys went home for a few weeks but was not able to go back to work as she had hoped.

In December she came back to Ashwell as she was very unwell and could not cope on her own.  She slept in Peter’s bedroom and gradually spent more time in bed.  I used to take her meals upstairs and helped her with her Christmas mail and shopping.

I can remember us discussing what to buy for her friend and ex next-door neighbour Joyce Bareham.   We eventually decided upon a hairbrush set, which I bought from Russell’s, the chemist and parcelled up to send by post.

I had also just completed the making of a blue taffeta skirt for the end of term dance and she was advising me on the hem length.  The material had been a length, which Dad had bought at a bargain price when he worked for Celanese.

It was a lovely colour but was murder to sew being slippery and I had done a silly thing when giving it a final press.  It had got rather creased and I could not get the crinkles out with just a cool iron so sprinkled the material with water which then produced a blotchy uneven appearance.  My sewing teacher said the only way to get over this was to completely immerse the whole skirt in water and iron it on the reverse side – which I did and cured the problem.

I was doing the Christmas Royal Mail delivery and went off to the Post Office Sorting Office very early in the morning.  When I returned home after doing the deliveries I used to take Aunty Gladys a drink and have a little chat about how many parcels I had delivered that day and general chit chat about the weather, preparations for Christmas and how she was feeling that day.

I had never been that close to Aunty Gladys as she had seemed to be rather prim and proper and a bit old fashioned in her views.  In present giving she excelled and never forgot anyone’s birthday.

Those few weeks while she was with us, so ill and vulnerable I realised what a kind and friendly persons she was and very like her sister Muriel in many ways.  She always considered other people before her own needs and was a true Christian person.

The last day of her life was 30th December 1955 and she had been very restless and uncomfortable in bed and the sheets and blankets were all over the place each time Mum or I went upstairs to her.  I went up to collect her lunch tray, which she hadn’t eaten at all and left her to have a sleep.

When Mum went up with a cup of tea mid afternoon she had died.  I think we were all rather shocked, somehow thinking she would get better in time.  Mum sent word up to a Mrs “Toowy” Waldock, who lived in Dixie’s Close, who was the village person who “laid out bodies” and she duly arrived.

Mum and I were rather embarrassed when Mrs Waldock came down from Aunty’s room and went into all the details of her job.  She seemed almost too matey and made us cringe with all the information she was pouring out.  I don’t think either of us cried then, we seemed stunned and unable to take it all in.

Colin Sackett recently discovered a Long Service Certificate in his loft that Aunty Gladys had from her firm Ilford Ltd in recognition of her faithful service extending over thirty years.

There was also a letter dated 18th March 1955 from F W Hutchinson, the Assistant Secretary on behalf of the Board of Directors as a mark of their appreciation and goodwill.

The Certificate was a large ornamental stiff cardboard sheet with the eight factories and offices pictured and intertwined with a border of roses with a pink ribbon entwined around the border and the words: Loyalty, Industry, Progress and Cooperation at the four corners and a picture of The Hon. James P Phillips in the centre, who was the Chairman who had signed the certificate.

I felt it summed her up very well, her attitude of long and faithful duty to her job and her life in general.