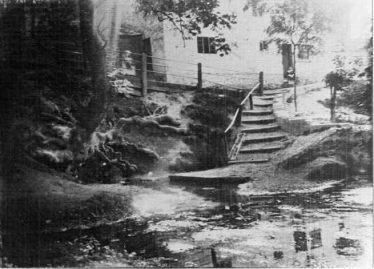 The water in Ashwell Springs is cold and clear and its plentiful supply must have been one of the main reasons why a settlement grew up here.

But by the 1880s most Ashwell people were not using pure water from the Springs but really awful water from wells, many of them badly contaminated.  Some of the water seemed as if it had come from a swamp.  It was extremely bad for people’s health.

A Medical Officer wrote in The Royston Crow on 8th May 1882, “The old cesspit system prevails in this village, and I have found some very bad examples.  There are, however, a few privies and troughs.”  This meant that lots of people got sick.  There were epidemics of scarlet fever, whooping cough and diphtheria.  Between July 1884 and February 1885 there were 200 cases of smallpox and fever.  Eleven died from smallpox.

In 1886 Ashwell was described as the most dirty and disease-ridden parish in the area.  The Medical Officer’s report in 1886 found many of the wells were full of sewage matter and the water in them unfit for drinking.

People were scared of fire, too.  There were lots of fires in the village, the worst being “The Great Fire of Ashwell” in 1850.  It started at 83 Back Street and went all the way through the village to Jessamine House, just past where the Post Office is now.

Arguments raged about making improvements but it was not until the early 1900s that a complete water and sewage system for the village was built.

Nowadays there is a good supply of piped water and most homes are on mains drainage.  There are still plenty of wells in people’s gardens and even a moat once renowned for growing excellent watercress.