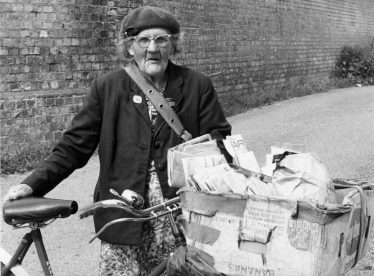 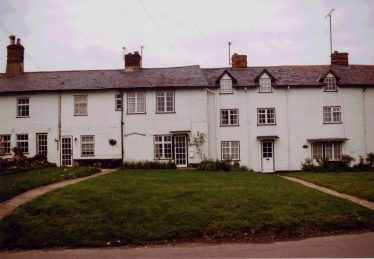 Ashwell seemed to have a good quantity of “characters”, and living in a village shop we got to know some of them quite well.  One family were the Kaye-Knellers who lived in Workhouse Row cottages near our shop’s back gates, opposite the museum.  They suddenly appeared with several children and a very scruffy but rather well spoken father, who always wore Wellington boots even in the heat of summer.  Robin Kaye-Kneller went to Hitchin Grammar with Peter and there was a teenage girl who went to the girl’s school.

I can remember Mr K.K coming into the shop smelling very smoky and buying large potatoes to bake in the embers of the fire.  They had no electricity and purchased plenty of candles and quantities of paraffin to light and heat the cottage.

They were unfortunately not very “good payers” and on one occasion Dad had been trying to collect the money for a very overdue amount for some time.  He saw his chance when out on his rounds when he was at the top of a hill and spotted Mr K at the bottom, sauntering along without a care in the world.  Dad switched off his engine and coasted silently down the hill stopping abreast of the astonished rogue, who was forced to pay what he owed.  After that the Kaye-Kneller family were not allowed any “tick”.

Mr Kaye-Kneller always had something to say on every subject and was rather a “know it all”.  Peter recalls being down by the Springs one hot summer day and calling out to a friend that he was going to buy some lemonade and being told off by Mr K. for suggesting such a thing as he had pure spring water there to drink for free.

Another tenant of Workhouse Row was Jack Skerman, known as “Jack Nigger” due to his swarthy complexion and lined face.  He was often to be seen with his gun and a couple of pigeons slung across the barrel returning from a shooting spree.

His brother and wife lived opposite our back entrance and were very respectable chapel going folk with a beautiful cottage garden, which was always a mass of colour all summer long.

Jack always looked rather scary and the kids of the village were prone to call out names when he passed by. He was likely to make a face and start to chase you but I think was harmless enough. Derek remembers throwing stones at his door and running away.

Annie Revels, who was Yvonne’s great aunt, lived along the High Street in the cottages beyond Westrope’s shop.  She used to put lots of hand written notices in her window, pinned to the lace curtains announcing different peoples debts and  shortcomings.  She was known to get very angry if anyone questioned her about his or her name appearing in her window and she was on the whole considered to be slightly “cracked” and not to be crossed.

Clive Whitby, known as “Whipplesticks” worked for Flower’s Brewery in Baldock and was often found waiting at the bus stop to go home, in rather a tipsy state.  On one occasion Colin and I joined him at the bus stop and he kept staring at us both.  After a few minutes he commented, “ I know the gel, but I don’t know you”, pointing at Colin with his walking stick.

Flo Worboys lived next door to the Skermans, opposite our back gate too.  She was the village post lady and was my instructress when I helped with the delivery of the Christmas mail.

She was a real old country woman and cycled round the village delivering the post in her own time.  She always sorted the letters and then came home for breakfast, leaving the postbag on the handles of the bike outside her cottage.  Businesses who were awaiting today’s mail urgently used to get rather annoyed at having to wait for Flo to finish her eggs and bacon and some folks were known to go and help themselves out of the bag.  They got a good ticking off if they were caught touching the Royal Mail, which was sacrosanct, and had to be delivered personally by Flo.

I thoroughly enjoyed my time helping her and we had some good laughs along the way.  She eventually received the OBE for her services to the village.

Derek recalls another character named Robert “the Bouncer”, as he was always bouncing a ball while walking about the village.  He was rather slow mentally and spent his time closing gates around the village, sometimes one would hear the slam of gates in the middle of the night as he did his rounds.

Another of Derek’s memories includes an elderly gentleman, a Mr Sheldrick who always wore old fashioned gaiters and rode a bicycle everywhere.

Everyone in the village seemed to have a nickname and our family did not escape.  Dad was “Goosey” Sackett, Peter was “Ebbie”, Colin was “Colonel”, Derek was “Larry”, which he already had from babyhood and I was “Haybag”.  Peter, Colin and Derek’s friends all had funny names, everything from “Whirly” Andrews, “Wellies” Bryant, etc etc.