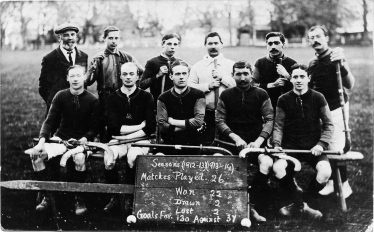 The weather could not have been too bad in January 1914 as the hockey team played at least three fixtures beating Letchworth twice and then a mixed team won a return match with Messrs W H Smith & Son, Letchworth, by a margin of 11 -1. Hockey was definitely the most active winter sport as the football team went off to Dunton with just 9 men. However they only lost 2-1 which was thought to be a good effort.

The other sporting event reported was a private hare coursing meeting on the fields of Mr J Sale and Mr N J Hine. They had a bag of 22 hares. I wonder if there are that many left in the whole parish today.

To brighten the dark nights the literary society had a recital of Dickens ever popular Christmas and a children’s evening which included some musical items. Not to be outdone the Choral Society had a concert at the County Council School but a bleak note said the society was abandoned after the meeting.

There were two workers suppers reported. Mr Gordon Cooper entertained workers from the farms of his father, Mr Wm Cooper, and Messrs EK and H Fordham’s treated their draymen at the Bushel & Strike.

The paper also recorded the commercial success of an Ashwell man who had emigrated to Canada. The son of Mr and Mrs John Bonfield, Arthur Bonfield, had been promoted from his company at International Falls- Fort Frances and there was a grand farewell celebration. Are they his brothers, Jack and Sam,  on the hockey team photo?

Another Ashwellian who had been abroad had not fared so well. Frederick Arthur Covington, 22, had only recently arrived back from a spell serving with the Artillery in India when he was taken ill and died. The death was hastened by his Indian experience. The report notes that blinds were drawn on the route through the village to St Mary’s for funeral.

Two other deaths were noted that of Rosa Ann, wife of Mr James Biscoe Bennett, 61, of the Poplars, a highly respected lady and Mr George Frost, 67, a leading citizen and member of Parish Council. The funeral was in the Congregational Church.

On Parish Council matters it was time for their Quarterly meeting. The mains water provision was still in its teething stage and the provision of special drainage map was left in Mr Fordham’s hands. I think we still hold this map in the museum. Whatever Mr Moss’s comments were on the cricket pitch they were referred to Recreation Ground Committee. Mr Goble (see Hockey team photograph) suggested a need for a further hose for the fire service but this time the decision was left to the Fire Committee. Increasing numbers of motorists were causing problems and signs would shortly be put up. Mr Parkhouse would see to it.

Finally, the Ashwell & District Nursing Association held its AGM at the County Council School. Mrs Wolverley Fordham presided. During the year any visits had taken place although there had been changes to the nursing staff however the funds were in balance. How lucky we were to have such an organisation in Ashwell before the days of the National Health Service.