You are here: HomenextAshwell historynextTopics, Subjects and Eventsnext100 Years Ago - Historic Diarynext1914 all the Newsnext1914 June 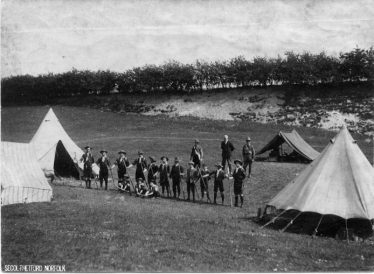 In sport the summer season was well under way in cricket a needle match was played between the two breweries. This time Fordham’s beat JR Page’s Brewery.   The Lawn Tennis Club played against the Great Northern Rail Club.

The Ashwell Boy Scouts were away at camp one weekend and then were on parade at a county review in St Albans.

June was a good month for weddings. On Whit Monday at Church, Mr George Lawmon married Miss Ethel Clare Haggar. At a much grander affair on the 20th June Miss Kathleen Mary Fordham, daughter of Mr E O Fordham, of Odsey House was married to Mr William Pettie Watt. Mrs Watt, as she became, lived on until the 1980’s in Odsey House. The rather grand house is now a little cut off as the A505 has become a fast dual carriageway main road.

There was the sad death of Farm Bailiff Peck, who was found in a field on his farm between Eyeworth and Ashwell. He was only 36 and leaves a wife and 3 children.  He appears to have cut his throat. In explanation it says he was recently struck by lightning and had not been the same since.

Mr H Waldock, 46, an employee at Mr C S Walkden’s herb business in Station Road, died of double pneumonia. He had served in the army for 5 years in India.

Of major concern was a serious outbreak of scarlet fever, causing both schools to be closed. All patients were sent to an isolation hospital and although the epidemic was subsiding it claimed Mr James Adkins as its latest victim.

Two events occurred of a slightly wider than parochial interest the Herts Congregational Union  came to the village for their summer meeting and on one Sunday morning the National Agricultural Labourers Union drew a ‘fairly large’ crowd.

And we must not forget the narrow escape that Mrs Fred Dellar from Elbrook had. She was wheeling her pram near Mrs Weighalls house when a branch from a tree fell on the pram hood. Luckily the child was only bruised.

This was the fare of your local newspaper 100 years ago.