You are here: HomenextAshwell historynextTopics, Subjects and Eventsnext100 Years Ago - Historic Diarynext1914 all the Newsnext1914 September 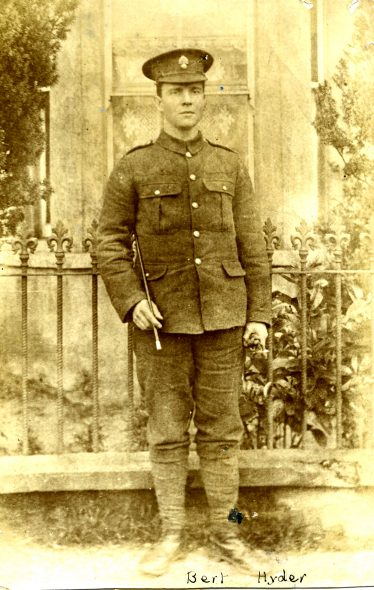 The War was again the main topic of news for the Crow but the emphasis had already shifted towards its effect on the local population.

A ‘Patriotic Meeting’ was held in the County Council School to discuss the national crisis and the best ways to help the country. Many leading local dignitaries were present. Mr W A Fordham’s example in volunteering for active service was highly praised. Mr W A Fordham, of Ashwell Bury had been a Captain in the Beds Imperial Yeomanry, he was now gazetted Major and volunteered for service abroad. Many more volunteered after.

Mr E Snow Fordham put a notice in the Post Office offering every Ashwell recruit 20s (£1) on leaving for the front. One of the first to claim, Mr Albert (Bert) Hyder, left for St George’s Barracks, London to join his old regiment, the West Canadian Rough Riders (Manitoba). He generously donated the money to the Red Cross.

Other recruits and reservists from Ashwell who had already left were listed. I am sorry to not have available the full list of names. This column is constructed from notes made by another hand from the original copies of the Royston Crow. These notes are hand written in old exercise books that we are at gradually transcribing into a digital format so that they can be searched more easily. To add more details and check the facts it would be a nice little project for someone to compare the versions – all it needs is a few trips to Royston! However I also include facts from the museums archives and many other sources, some of which can only be used after 100 years. Along with photographs they help to give a broader picture than these brief notes would tell on their own.

In other news the Ashwell District Council discussed the provision of housing for workmen, police, roadmen, etc. They concluded that they were not willing to build them because any faults would be their own expense, however the County Council would be more than welcome to carry out the work. It was noted that Mr George Baker, Surveyor to Highways, for Ashwell DC had died.

September was also the traditional time for Harvest Suppers though perhaps these would be the last for many of the men who would go off to the war. Sir George Fordham’s men were entertained at the Railway Tavern, which is now The Jester. Mr and Mrs W A Fordham held a party for over 30 farm and Bury employees at Bluegates Farm.