You are here: HomenextAshwell historynextTopics, Subjects and Eventsnext100 Years Ago - Historic Diarynext1914 all the Newsnext1914 March

If you wanted a talk to while away the pre-TV evenings there were several on offer during March 1914. The ever popular Literary Society started the month with the subject of “Heredity” by a doctor. It was illustrated with lantern slides as was the lecture by the British and Foreign Bible Society about tombs and temples of Egypt.

There was a report about six Ashwell friends who were seeking a greater thrill but their plans for a good night out went a little wrong. They attended a Saturday evening showing at Baldock Cinema. Assured by cinema ads they stayed to the finish but then found their train did not stop at Ashwell as advertised. They took hired transport home and also had to pay for the pre-arranged transport from Ashwell station.  It was a night that had not reached expectations and become very expensive. They planned to sue the cinema, but a rep said notice about the train had been sent to and posted up in Ashwell.

Meanwhile at “The Engine” in Back Street there was a social evening with supper served by Mr and Mrs Walter Rand. Entertainment of a different sort could be had at the Wesleyan Church with a Sunday school concert and two sermons on their home mission in Paddington.

In sport the Hockey team were as usual on good form. They beat King’s Cross XI 7-0 at home and then after a hard game were 4-0 victors over Letchworth Spirella. However more success was delayed when although the Ashwell Club appeared on field the Letchworth team failed to turn up due to a misunderstanding. After my comments about hares the other month it seems that although there were several more coursing meetings in the month the hares were still plentiful. This did not go for the fox hunting. About 50 riders from the Cambridgeshire hunt met in bad weather in Bury Park. They eventually found a fox in Mr J Sales field but it got away.

Other announcements concerned the Ashwell Cricket Club Annual meeting, the Rural District of Ashwell’s statement of accounts and the death, after a painful illness of Ronald Picking who was only 19. The departure of PC Davis after 6 years’ service was tinged with regret as he had done much to reduce rowdiness and improve behaviour.

To finish off the month the Literary society had the first of a series of lectures on Bygone Ashwell by H W Bowman. Henry Bowman lived in Little Garth, Mill Street, held many positions in the village and was also our first local historian. The lectures he gave brought together a lot of ideas that may seem fanciful in the light of modern scholarship but when he is talking about village customs and events his contacts go straight back into the depths of the 19th century. The following extract about old roads gives a flavour of his style but must be read with these provisos:

‘Roads from rutted tracks to near perfect scrub around the village. Pack horses made tracks which became roads, twisting to avoid boggy patches. Up to the mid-17th Century waggons could not travel in winter and goods had to be moved from farms by pack horse. Kingsland Way went from the green or market place and probably where the audience  were seated in that URC Hall. It was upon the old line of that road which passed along to royal Bennington, where Saxons held council and on to Hertford, and even to the Kingsland Way in London. The Forty-Foot way went from the north of the parish at White Gate, along the river, past the Notch and Bloxmead to Common Lane, Beacon Leg, over the green field of the Redlands to Slip End. Caldecote Way was mentioned in early times as a highway. The Lush Way probably started in Baldock leading to the House of the Knights Hospitallers at Shingay. Other roads dealt with and especially reasoned upon were the Icknield Way and the Ashwell Strete. Also a point was made of the Poulter’s Way.  Then he gave details of the pre-enclosure fields and explanations of local land marks e.g. Cat ditch (Celtic) from Cath, celtic for cattle. Slip End from Stulpe or stilp – a boundary post.  Odsey was possibly derived from Odds Island. The Sinks from a man named Synke who inherited land from John Bill – royal physician to Henry VIII and other Tudor monarchs. Ruddery probably comes from Rudderia – wife of Sheriff Picot, who build chapels as thanks for recovering.’ 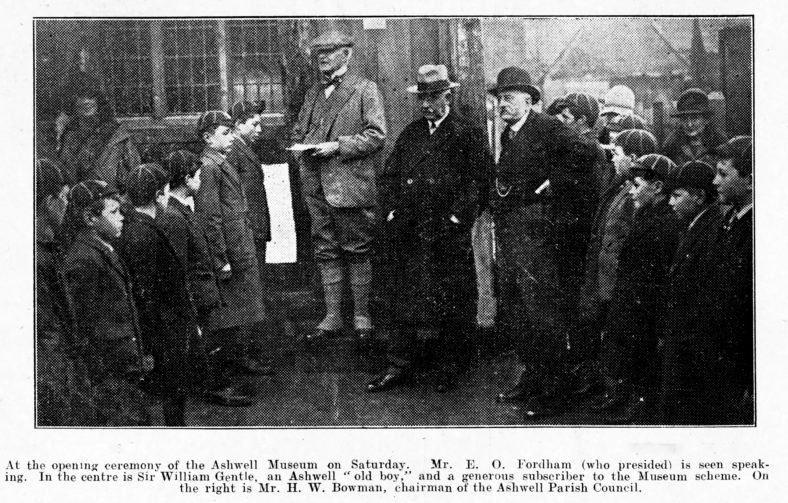 zoom
H W Bowman in the bowler hat at the opening of the Ashwell Village Museum, 1930