You are here: HomenextAshwell historynextTopics, Subjects and Eventsnext100 Years Ago - Historic Diarynext1914 all the Newsnext1914 July 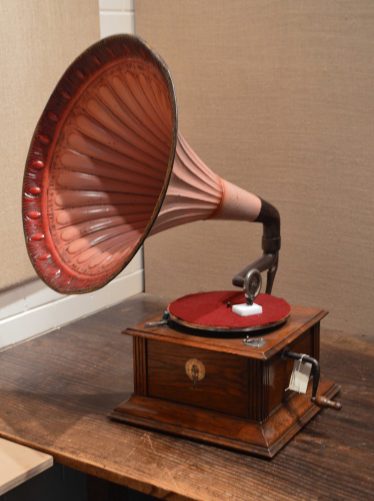 zoom
Gramophone similar to one used to entertain customers at the Stags Head. This one was used in the Cricketers

Miss Minnie Barker of the Grange married Mr B Christy of Westbury Farm. The paper states that the bride was given away by Mrs Weigall which seems a little strange, although Mrs Weigall was then living at the Grange. However the Crow also reports that an Odsey marriage had been arranged between Sir Herbert George Fordham and Mrs Stewart Weigall and would take place quietly at St Margaret’s, Westminster, on the 4th August. It was then she became Lady Fordham and moved to Odsey. As Ethel Weigall she published several books the most well-known being ‘Mrs Trigley’s Visitors’

Also, relating to a marriage in the previous month, Mr P Watt celebrated by inviting the choir to a special tea at the Bushel & Strike. He had been a former chorister.

Sport for the month consisted entirely of cricket. Many games were reported and Dr Berkely’s XI from Middlesex Hospital were going to be a week late for their annual visit.

There was sad news of two deaths, that of Thomas Austin, 77 and on the 22nd July Mr James Bray, 90. However Mr William Cooper was making a good recovery from his painful illness.

The political crisis in Europe was looming large enough to be mentioned in the local press. The Crow said that Serbia had rejected Austria’s ultimatum. Austria, Serbia and Russia were mobilising and there was martial law throughout the Austro-Hungarian Empire. Germany warned the great powers against intervention and hoped it was not too late. However as the month went on war was declared between Serbia and Austria and troops invaded. Meanwhile the British navy was preparing at Portsmouth.

There were several jolly events though to stop people worrying. The Wesleyan Church held some special Anniversary services. The Bury Gardens were open again on 26th July.

Fordham’s Brewery had its annual excursion. A special train was hired for the day which took 65 employees and some of their wives off to Margate. They were joined by the workers from Fordhams Harringay depot. Naturally there were casks of beer on the train for all to enjoy so the day went very well.

There was a Subscription Supper at the Stag’s Head in the High Street on 16th July, with over 50 present. Mr S Wright of Walkern, the owner of Stag was a guest and was said to be ‘very generous’. The host and hostess, Mr and Mrs Covington, served supper this was followed by songs and entertainment from Mr Skerman’s gramophone. This must have been something special to be mentioned in the newspaper. We have in the museum a similar gramophone that was used to amuse customers by the landlord of the Cricketers pub.