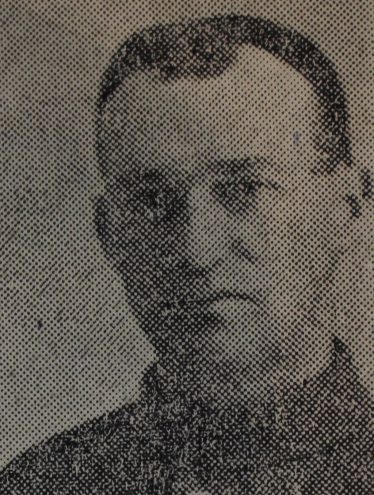 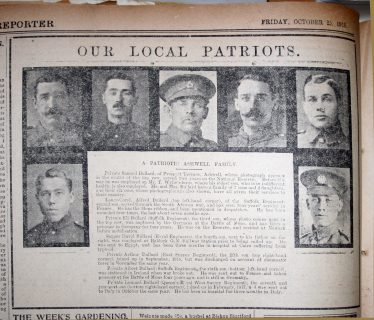 The big news of the month was the sale in London on the 31st October, ‘By Order of the Executors’ of a large estate consisting primarily of three excellent farms, two of which were in Ashwell. Westbury Farm’s land was 290 acres but there was also a picturesque old English farmhouse, large and well-arranged farm buildings, an orchard with a small Pleasure Garden and moreover the house was supplied with water from the Council’s Water System. The quarries in Hinxworth Road were also in the same lot. The farm had been let for a long time, as was not unusual, to Mr Christy and I believe he carried on farming there after the sale.

The other Ashwell farm was Farrows Farm that comprised 339 acres, a substantial house in the village and an excellent range of farm buildings. This again had been let for some time to Mr John Sale but he purchased it at this auction.

The next lot was a Capital Small Holding, known as Partridge Hall, with a Comfortable Little House, a small set of buildings and 4½ acres of arable land. This was lately let to Mr W Searle but is tenancy had expired.

At the Royston Childrens Court Cecil George Andrews, described as a labourer but obviously still a minor, was charged with entering and stealing money from Mrs Shirley Carter and twice from Mrs Jessie Pack, both of Station Road. His mother said he was beyond her control because his father had left 14 years before. Cecil said he had spent most of the money at Baldock Fair and pleaded guilty, but sentence was limited to 2 years probation in view of his age.

At home the village was affected by the war in two different ways. The Maltings in Green Lane was a prisoner-of-war camp. One of the German inmates died from pneumonia following a bout of flu and he was buried by his fellows in the new burial ground.

At the Bury VAD Hospital the Cadets had now left and 15 convalescent soldiers had arrived.

From the Front there was news of two casualties.

Private John Charles Winter, 32, of the Northants Regiment, formerly of Ashwell, was killed in action in France on 21st September 1918. He was the younger son of Mr and Mrs Samuel Winter and married Elizabeth Hales in 1915. He had been a pupil at the Merchant

Taylors School and before enlisting was well known for his prowess at football and athletics. A comrade writing to his parents of his burial said: “We buried him on the side of a ridge facing a little village called Lampere on the outskirts of the German outposts facing the main Hindenburg line with a rifle at his head and his identification disc but awaiting a cross.” He is commemorated on the Ashwell War Memorial.

The other casualty report is of 2nd Lieutenant Stanley Rogers, 23, late of Westbury, Ashwell, who was killed in action on 4th October. The military records for Stanley state he first joined the Royal Fusiliers, transferred to the Middlesex Regiment, and then was commissioned as 2nd Lieutenant with the Wiltshire Regiment on 28th May 1918.  He was killed in action in the Battle of the Hindenburg Line on 4th October 1918 and is commemorated on the Viz-en-Artois Memorial, Pas de Calais, France.  His records show his medals were sent to Daisy Rogers, presumably his wife of 64, Cottage Grove, Southsea, Hampshire.

However his connection to Ashwell is harder to prove. On the 1911 census James Rogers was living at Westbury Cottages with his wife and one daughter. He had had 6 children with only three still living but there is no mention of a Stanley. A suggestion for his movements is that by the census he had already moved away to work, married Daisy then lived in Southsea but we cannot be sure.

Finally there was a story, designed to be more uplifting for those at home, of the patriotic Bullard family and there remarkable service record.

Private Samuel Bullard of Prospect Terrace, Back Street the father of 7 sons and 2 daughters, was 2 years on the reserve.

Private Alfred Bullard served in the South African war and France for 4 years was awarded the Mons ribbon and had been wounded 4 times.

Private Eli Bullard had been a prisoner of the Germans from early in the war.

Sapper David Bullard, formerly a railway employee at Baldock, was now in Cairo but ill with typhoid.

Private Arthur Bullard contracted rheumatic fever and was discharged after a short spell in the army.

Private Albert Bullard, who served in Ireland and France, was taken prisoner at battle of Mons.

Private Leonard Bullard was in hospital after 3 months in Italy.

The eldest son, who is in indifferent health, works on Mr Wylie’s farm with his father.

Fuller details of all these men can be found on the museum website – Roll of Honour WW1 https://www.ashwellmuseum.org.uk/category/roll_of_honour_-ww1