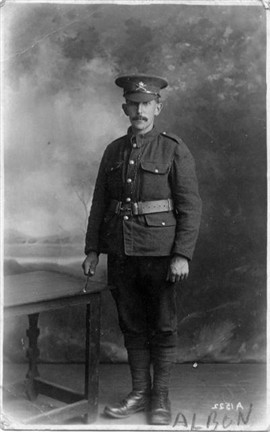 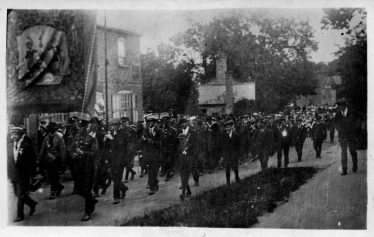 November was a month of very mixed news on one hand the Armistice was signed but on the other the ‘Spanish’ influenza was rife.

The epidemic caused the schools to close and the new founded Women’s Institute cancelled its meeting. The deaths of two older residents were reported which may also have been related to the flu. Edith Waldock, 68, and the local builder Frederick John Bailey, 71. He died at Westcliffe the house he had built for his retirement at the top of Bear Lane which has now been demolished and replaced by a small housing development.

On a lighter note and to show that life might soon get back to normal there was a meeting at the Technical School (now the Parish Rooms in Swan Street) to form an Allotment & Smallholders Association.

Although the war was supposedly over the consequences of it were still being felt by families in the village as we continued to be fed a seemingly endless list of casualties and soldiers stories.

Under the heading ‘Ashwell Boy Wounded’ the paper records: Rifleman Albert F Hall has written from a hospital in Huddersfield, informing his relatives Mr and Mrs C Reynolds, with whom he had made his home, that he was wounded in the thigh by a shell. He was in fighting around Courtai on Sunday, 20th October, when at midnight a shell burst in the midst of his platoon, injuring himself and others. He expresses thankfulness at his miraculous escape, he being the one to suffer least. He says he has an interesting souvenir in the shrapnel which has been extracted from his thigh and is now making good progress.
Albert survived the war and went on to marry and bring up a family in Ashwell.

Another Ashwell soldier was not so lucky. Private Frank Joseph Potton, aged 20, was wounded in action on the 17th October and died at a Casualty Clearing Station two days later. Frank was the fourth son of David and Clara Potton of 42 Station Road.  He was a pupil of the Merchant Taylors School in Ashwell and before he enlisted he had been employed by Bailey & Co and Mr Thomas Wylie. After his death his parents called their house Roisel which was the name of the war cemetery in France where Frank is buried.

In more news from The Front Private Lewis Daniels, also of Station Road, was reported missing in action but with no further details.

A letter from an old Ashwell Merchant Taylors School boy sent to Mr Chote, the headmaster, from a far off front of the war, tells of the living conditions in Egypt throughout 1915 and the long trek on horses from Palestine to Tiberius (Galilee) and on to Damascus. The countryside was hot, dry and desolate until they came to the green gardens at Damascus. The rations were variable, but the soldiers carried water (clean if at all possible) tea, sugar and condensed milk.

Corporal Frank Albon of the Machine Gun Corps was awarded the Military Medal ‘for gallantry and devotion to duty under fire’ He had been a grocers assistant before the war living with his parents in Kingsland Terrace. He survived the war and died in 1966.

The lives and records of nearly all the men with any Ashwell association who served in World War 1 are now available on the Ashwell Museum community archive website under the Roll of Honour heading.

This immense task has been carried out by Lynette Wray, who deserves our thanks. The information has been gleaned from the museum archives, from relatives, and from the internet. Please look and wonder at the wealth of facts that have been discovered but there is always scope for more detail that can be added by family recollections and photographs.

This is one way of remembering all those that went through the pointless suffering for a cause that could never be achieved.

Throughout the last four years we have been publishing, on monthly basis, the story of the war and I hope to have shown the great effect it had on the men directly involved, their families, friends and employers and how the village coped with such a tragic situation. However, in the months to come we may see that the effect of the war is far from over and it will still be in the news for a long time.