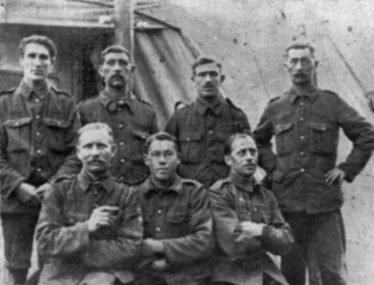 Reproduced in the paper was a photograph of 7 soldiers in a prison camp at Doerberitz, Germany including Privates Eli and Albert Bullard, sons of Mr & Mrs Bullard of Ashwell. They had been captured in the retreat from Mons somewhere around the 26th August, 1914 and spent the rest of the war in the prison camp.

Several men were home from the Front with stories to tell. Private William Huffer had completed 13 months service when he was wounded by a mine. He was now home recovering from severe burns and a broken leg.

William Picking was a driver with the Army Service Corps and had been with the1st Expeditionary Force in the retreat from Mons.

Private Percy Worboys served with the Australian contingent in the Peninsular war and was recovering from wounds received in Gallipoli. Fortunately, as reported in November, he was well enough to write a letter about his experiences to the paper.

Lance-Corporal Herbert Smith of the 2nd Bedfords, a bomb thrower, was in Ashwell for a short while and during his service he had already been mentioned four times in dispatches.

Corporal William A Flack of Odsey showed extreme bravery and was awarded the Distinguished Conduct Medal.  The citation runs: “For conspicuous gallantry at Hooge on 13th November 1915.  He unscrewed a burning fuse from a 50lb trench mortar bomb, which had fallen back into the bore of a gun owing to a misfire. By his prompt and brave action he saved the lives of the detachment and averted the destruction of the gun. The unscrewed fuse exploded as he threw it from him”

On a happier note Private Clements was married on the 9th December at Egham, Surrey. He was the second son of Mr & Mrs H Clements of Silver Street, Ashwell.  The Clements had 3 sons all of whom were serving and one was wounded.

Among those enlisting this week was Alexander E Anns, Ashwell RFA. Alexander is something of an enigma as we can find no military records for him. He was the elder brother of Frederick Anns who, as reported last month was killed in action on the 5th November 1915. Their parents were living at the Redlands and this is likely to be the connection with Ashwell but how long they were there is hard to tell as all other references to the family have London addresses. The RFA or Royal Field Artillery was partially a volunteer reservist force so our best guess, until more information comes along, is that he joined the Ashwell branch but at the advanced age of 33 or 34 was never called up to full service.

On the fundraising front Mrs Wolverley Fordham was still very prominent. As vice-president of Ashwell & Hinxworth Red Cross she received £38-18-10d from Ashwell and from Hinxworth £17-10-6d, in annual contributions all of which were sent to the ‘Herts Hut’. The huts were sponsored by individual county Red Cross societies and set up in the grounds of the Netley Military Hospital near Southampton to cope with the rapid increase in the number of casualties from the war.

The Literary Society kept normal life going with an illustrated lecture on Switzerland and also a programme of music and poems. There were weekly First Aid lectures to a mixed class at The Bury.  A note mentions the publication of a book by Sir George Fordham called the Highways of History and Civilisation or Roads and Travel before Railways in Hertfordshire and Elsewhere

There was a serious accident to concerning a motor dray belonging to Messrs E K Fordham’s Ashwell Brewery. It had arrived at the Red Cow, Royston, with drayman Goss missing. He was later picked up near Great Chishill and taken back to Ashwell with a broken arm. He must have fallen off the lorry without the others realising until they came to the next stop.

At Royston Petty Sessions the story of the dilapidated houses in Ashwell Street continued. This time the Inspector of Nuisances turned up but all he reported was that the previous complaints had not been not dealt with, that the builders had been instructed to carry out the work but it had not been done yet so the order for nuisance was abated again. Read on next month to see if anything happens.