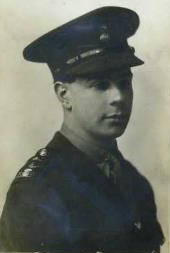 There were mentions for several volunteers who had recently enlisted in the Army.

Mr Laurence V Pack joined the Herts Territorials. Amongst other things ‘Lol’ ran a small farm based at Greith House in the High Street. He was a keen sportsman in his younger days. The picture shows him in the 1922 cricket team but we have another from 1938 with him still playing.

The newspaper also states that Mr G Bryant, who emigrated to Canada some years ago, returned to this country to enlist and that the whole event of his farewell was reported in “The Daily Colonist” of Victoria, British Columbia. However this has thrown us into a little confusion as we can only find records for one G Bryant and this refers to George Bryant who enlisted in February 1916. George was the third son of Benjamin and Esther Bryant of Victoria Cottage, Ashwell. He had been a pupil at the Merchant Taylors School and before joining the army was a bricklayer’s labourer. Is this another person or could he have returned from Canada, worked for a while and then enlisted?

Another old boy from the school, Mr Algernon H Chote enlisted in the Honourable Artillery Company. This took the school Roll of Honour to over 100.

We heard in August that Captain Hugh A Fordham, of Elbrook House had been invalided home with frost-bitten feet but was now back in the trenches however his tour of duty was cut short by October as he was wounded by a bomb and been taken to hospital.

Mrs Webb organised a collection for Herts prisoners of war on behalf of the SSAFA. The Soldiers Sailors and Airmen Families Association was formed in 1885 and was one of the first charities to support the lower ranks and their families. She raised £4-12-6 for this cause.

The War Office was continuing with its arrangements to open a Military Hospital in Ashwell. The most likely the site had been earmarked as the Merchant Taylors School but a suitable alternative for the boys had to be found so the Independent Chapel Sunday School Room was inspected.

Another unforeseen outcome of the war was a new government order which imposed restrictions on the use of lighting and had the consequence of the Church having to cancel its evening services.

The Literary Society had an inaugural meeting to launch a new regular series of readings songs and other similar entertainments. Village life had to go on as normal as possible.

At this time the Parish Council only met 3 or 4 times a year to discuss matters of village concern. They had to find a building to house a fire appliance and bier. One owned by Mr G F Strickland in Silver Street was found suitable and approved for use.  Mr W T Bowley was instructed to lay out the boundary of the recreation ground. The Parish council were in dispute with the Ashwell Benefit Society as to its exact position.  Bailey’s, the building firm, had quoted for making repairs to the fencing the sum of one guinea (£1.05).