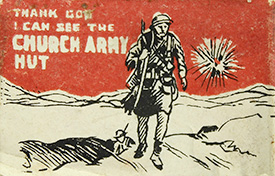 The aftermath of the war was still rumbling on with the problems of the returning soldiers needing attention. There were several meetings of the local Ex-Servicemen’s Committee when it was agreed to apply for a grant for a hut like those provided by the Church Army during the war. These ‘Huts’ stood just behind the lines and provided great relief for soldiers when off duty. Some of the men on returning to village life, were obviously missing the camaraderie of those that had gone through the same experiences and the new hut would provide a way of remembering the better aspect of the conflict. The committee also organised the presentation to Mr S Parkhouse of an inscribed silver cigarette case for organising the Welcome Home Dinner.

Another of the consequences of the war on the home front were events being cancelled owing to factors beyond our control – something we are getting used to at the present time. This example for Ashwell not only transports us back a hundred years but straight back into the middle ages. The Manor Court met for the first time since 1914. The Steward held the meeting at the Three Tuns. This probably concerned the Manor of Ashwell, which had been the main landholder although there were several other manors in the village. All those who had purchased property under the tenure of the manor after its last meeting and who were copyholders had to attend to pay their fines to the lord.

Manors had been gradually losing their role in society. In Tudor times the parish took over more responsibility for what are now local government duties (caring for the poor, highways and law & order). In 1841 the government took away most of the property rights of the manor by allowing copyholders to become freeholders for a fee and the last manorial jurisdiction was removed in 1926. I imagine this meeting was more a formality rather than necessary business especially as the proceedings ended with luncheon provided for all those attending.

During May the Ashwell football team played their last match of the season, losing at home to their old rivals Kryn & Lahy from Letchworth, 3-1. The cricket season started with a bang when Ashwell beat Hitchin by 74 runs to 57. They drew with Stotfold and then played against ‘The Breweries’, a combined team from the two Ashwell breweries operating at the time – Fordhams and Pages. The Breweries proved the stronger on this occasion but I wonder how many men would have been eligible to play for both sides.

The Cricket Club also benefitted from a varied entertainment put on by the Men’s Club Dramatic Society over two nights at the Merchant Taylors School. Mr W A Fordham gave the vote of thanks.

On the 8th May the marriage took place at Congregational Church (now the URC) between Harry Clark, 2nd son of Mr & Mrs James Clark of Mill Cottages, Odsey was married to Gracie Barnes, 3rd daughter of Mr & Mrs James Barnes of Slip End Farm. The couple were to live at Redburn.

And meanwhile the W.I. was going from strength to strength with the enrolment of several new members. There was a talk on home production to combat the threat of inflation and all enjoyed some Country dances.