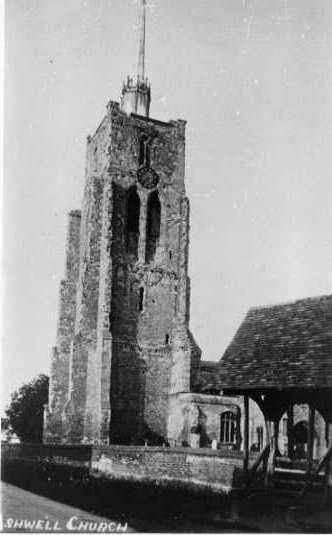 In March 1919 Ashwell news was very thin on the ground but it covered a wide area of interest and although the war did not get a mention the on-going influenza epidemic was having an effect on village life.

A confirmation service was held in St Marys church by the Bishop of St Albans.  21 candidates came forward, of which 16 were male and 5 female.  Several more were prevented from taking part because they had contracted influenza.

Thirteen candidates stood in the Ashwell Parish Council Election and 10 were elected. At the first meeting the statements of the village charities were produced and discussed. A resolution by Mr Parkhouse to put the winding of church clock on the rates, was opposed and lost. A request on behalf of parishioners was put to the Postmaster-General for a regular second delivery of letters. And for matters less directly concerning the parish there was a proposal that the light railway to Biggleswade be continued to the Great Northern railway station.

The Ashwell Women’s Institute held a full meeting at the Merchant Taylors School at which they crammed in two instructive talks. The first by the Merchant Taylors School headmaster, Mr Biles on work to be done in the garden and the second by Mr Saunders of the Phoenix Motor Works on upholstery.  He gave special advice on making a loose cover for an old chair. Recitations and dances provided the fun element for the members who now numbered 83.

Mrs Fordham of the Bury, ever at the forefront of bringing up-to-date education practices to the village, offered the Girls School a special teacher in Morris Dancing for a week in March. The Girls School was part of the present Junior School and presumably Mrs Fordham financed this out of her own pocket. The pupils would have instruction every day to take the place of drill, singing, play and optional lessons. Country dancing became a regular part of the curriculum.