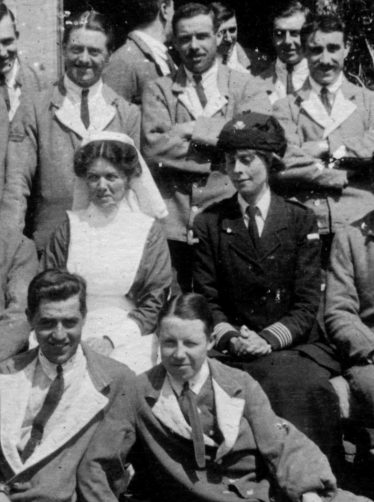 zoom
Mrs Fordham in Commandant of the VAD hospital uniform

Mrs Phoebe Daniels of Station Road published an appeal for news of her husband, Private Lewis Daniels. He had been reported missing and was now presumed killed, she would appreciate any information from his comrades. Phoebe must have been pregnant at the time of his death as the last of their five children, Gladys, was born in 1919. The three daughters all went on to marry Ashwell men.

Lewis was a cowman on an Ashwell farm and was well into his thirties when he joined the Norfolk Regiment on the 22nd June 1918. He survived just under 4 months in the army as the date of his death is now accepted as 21st October 1918. He is commemorated on the Le Cateau memorial, France and the Ashwell War Memorial.

In a footnote to the war we have recently looked at the dates of soldiers’ deaths and have discovered an appalling last month of hostilities. In October 1918 four Ashwell men were killed in action over a period of only 5 days from the 19th to the 23rd: Frank Potton, Lewis Daniels, Percy Revels and Bruce Law. But the toll carried on even after hostilities had ended. Harry W George Waldock and Julius Eversden died of influenza caught at training camp. Many that did survive came back in a very different state of health or mind. Herbert Covington and Herbert G Waldock died in the 1920’s from injuries sustained in action.

The Voluntary Aid Detachment workers at the Bury Hospital were official demobilized on the 3rd February. The equipment was returned to those who leant it and to other relevant organisations which included the Ashwell Nursing Association, Ashwell Rectory Lending Cupboard, and Ashwell Young Men’s Club. The remainder was sold in a sale at the Merchant Taylors School. Special appreciation was given by the Commandant, Mrs W A Fordham, to the Medical Officer, Mr Woodforde, the Lady Superintendent, Mrs Harry Christy, the Quarter-Master, Mrs May Sale, and the Head Cook, Mrs Moss. In 1918 the average cost of each patient per  day was 18p and each of the 316 patients was in the hospital for about 19 days.

However fundraising did not stop at the end of war. A letter from Mrs E Mary Fordham listed the money collected in boxes at inns in the villages surrounding Royston and subsequently sent to the Red Cross. Another event was a variety Entertainment at the Merchant Taylors School which raised £8-17s-9d for the Ashwell Wolf Cub pack.

A large amount of space in the newspaper was given over to a full report of the funeral of Mr E Snow Fordham of Elbrook House. It was quite common at the time to give details of the service, the mourners, and the flowers especially for an important local figure.

The deaths were announced with no further details of Kate Elizabeth Maddams, aged 64, of West Villa, Ashwell on 1st February and Jane Whitby of Ashwell, aged 87, at Royston.