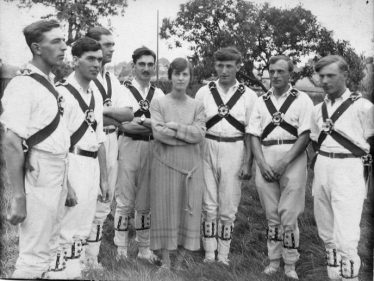 Sport was back on the agenda in May 1913. In an advert the Tennis club invited entries for a tournament and on the 9th had their AGM at the Merchant Taylors School. The Ashwell Cricket Club had its first match of the season against the Cambridge Rabbits

Two events were of special notice. A balloon descended at Windy Harbour, Odsey obviously unintentionally as the occupants, one of which was Lord Lambton, were severely shaken. A storm on the Tuesday evening was very inconvenient to the audience at a Merchant Taylors School entertainment organised by Mrs Fordham in aid of a new church window. Whether this was the same event at which Mrs Fordham revived the art of Morris Dancing with a high standard display I do not know.

The school was very busy in May as The Merchant Taylors Company had their annual visit. They were welcomed with a concert given by the Scouts. The concert included a song for boy singers called “More than Gold”. It was written by Miss Madeline Chote  A.R.C.M, A.R.C.O, the daughter of the headmaster. She accompanied the boys herself and later played the organ in the church. There was also the usual money distribution.

The Snowdrop Minstrels, that I mentioned last month, were on a grand tour for local charities that included concerts in Guilden Morden, Hinxworth and Baldock. Two of the sickness clubs had their annual feasts. The Thursday Club at the Bushel and Strike had 50 present but 250 went to the Stag Club feast. The Stag was a pub on the High Street opposite Days which used to have a large club room at the rear.

The Rural District Council announced an Inspector of Nuisances was to be appointed for Ashwell at £50 p.a. salary, as soon as local Govt. Board approve. I wonder why he was so important and what his duties were to be.

Two deaths were reported that of Mr Chas Huggins mourned by his three sons and Mary Covington, 76 years. But on a brighter note on Whit Monday there were unusually three marriages in the church. For the Crow the most important of these was the wedding of Miss Laura May Kingsley, youngest daughter of Mr & Mrs John Kingsley of Odsey Lane Farm and Mr J. Dickens.