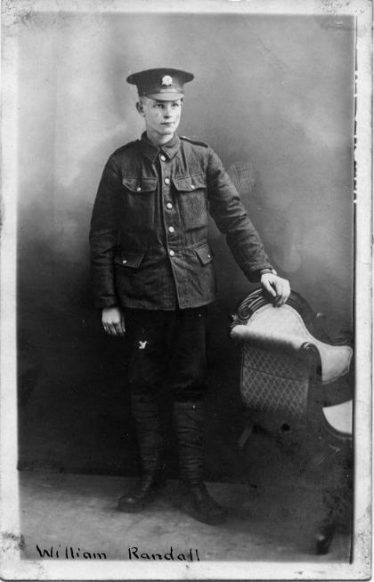 William enlisted on 11 November 1914 and joined the Bedfordshire Regiment, 4th Battalion, Regimental Number 4/7381. He embarked for France on 24 April 1915 where his Battalion engaged in the Battle of the Ancre, on The Somme. In August 1916 William was shot through the left shoulder and lost his arm. He was evacuated and in December 1916 was recuperating in a hospital in Manchester.  He was discharged on 7 February 1917 as no longer fit for active duty.  He survived the War.

He is commemorated on the St Mary’s Church Ashwell Roll of Honour. He was awarded the British War Medal, the Victory Medal, the 14-15 Star, and the Silver War Badge.

William was born on 28 April 1898 at Guilden Morden, Cambridgeshire, the first son of Frederick Thomas and Sarah Jane (nee Picking) Randall. By 1911 the Randall family had moved to Partridge Hill, Ashwell and William was a pupil at the Merchant Taylors School.

William married Ethel Francis Butchart at East Barnet, Middlesex in the second quarter 1921, and they set up home there.  They had two sons, Stanley born 20 November 1921 and William born 20 July 1925.