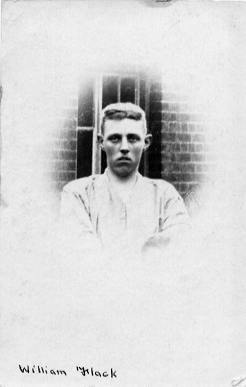 While a corporal, he showed extreme bravery and was awarded the Distinguished Conduct Medal.  “For conspicuous gallantry at Hooge on 13th November 1915.  He unscrewed a burning fuse from a 50lb trench mortar bomb, which had fallen  back into the bore of a gun owing to a misfire. By his prompt and brave action he saved the lives of the detachment and averted the destruction of the gun. The unscrewed fuse exploded as he threw it from him”.  He was then promoted to 2nd Lieutenant.

He was shot in the head by an enemy sniper and was being transported back to England but died in Boulogne on 19th December 1915.

William was awarded the Distinguished Conduct Medal, the 14/15 Star, the Victory Medal and the British War Medal.

He is buried in the Boulogne Military Cemetery, Eastern Part 11 UK Graves A-F, and on the Odsey War Memorial, Cambridgeshire.

William was born in Steeple Morden, the eldest son of Arthur and Rosetta (nee Revell) Flack of Odsey Mill, Odsey, Cambridgeshire.  At the time of enlisting his parents were living in Rock Road, Royston.

Before enlisting with the Royal Garrison Artillery William was a labourer on a nearby farm.