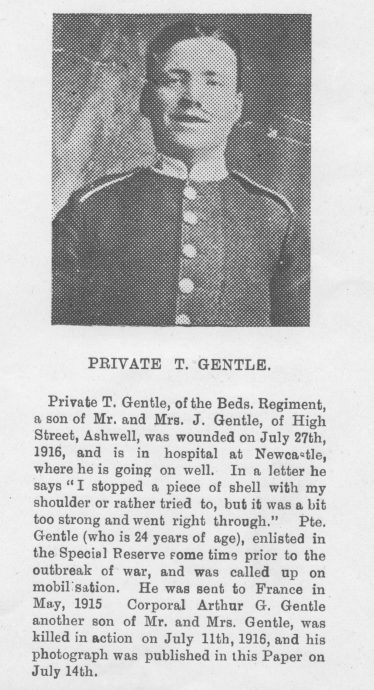 Thomas enlisted with the Bedfordshire Reserves on 30 December 1912.  He was called up on mobilisation and joined the 1st Battalion of the Bedfordshire Regiment. He was sent to France on 13th May 1915. He received a shrapnel wound to his shoulder in 1916 and after spending some time in a hospital in Newcastle was discharged from the army on 23 February 1917.

Thomas was awarded the 1915 Star, the British War Medal, the Victory medal and the Silver War Badge.

Thomas survived the war and died at Baldock on 27th June 1969.

Thomas was born on 19th October 1892 at Caldecote, fifth son of James and Emily (nee Hull) at Caldecote, Hertfordshire. He was a pupil of the Merchant Taylors School. The 1911 census shows him working as a farm labourer.