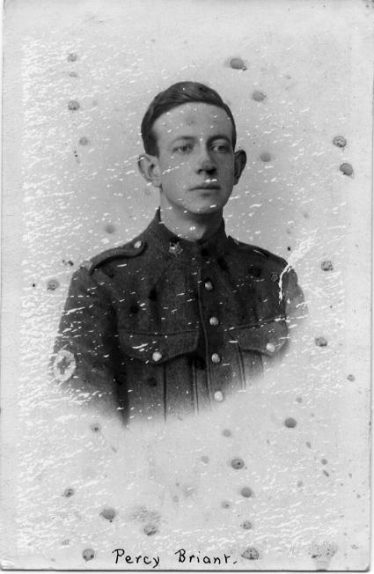 Percy enlisted with the Canadian Overseas Expeditionary Force on 13th September 1915 at Vernon, British Columbia, Canada, Regimental Number 522866. He first served with the 1st Field Ambulance B Section on the Western Front, France and Flanders. By March 1918 he had been promoted to Acting Staff Sergeant. In August 1918 he was on commission to the RAF in Blandford, Kent, England and reverts back to the rank of Private. In December 1918 he is on command to 81 Squadron and is granted permission to marry. He spends approximately the next year as a mechanic finishing the war as Acting Sergeant. He is discharged from the Air Force in February 1920.

Percy survived the War and died in 1977.

Percy was a student of the Merchant Taylors School in Ashwell and before enlisting was a carpenter.

Percy emigrated to Canada in about 1913/14 and enlisted in the Canadian army in 1915.  At the end of the War Percy returned to England.

Percy married Florence Lily Gains in Elham, Kent in the first quarter of 1919.  They had one daughter, Mona Evelyn, born at Ware in the 3rd quarter of 1922.

In his father’s probate record of 1932 Percy is recorded as a millwright.

He died in Northallerton, Yorkshire on 10th March 1977.

Percy’s brother Henry William served with the Royal Engineers during WWI and survived the War, dying in Walthamstow on 11 September 1965.

Royston Crow February 1914  Letter to Mr Chote, headmaster at M.T. from Percy Bryant, now in Victoria B.C. Canada telling of his life and work as a builder.