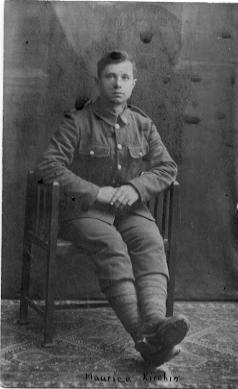 Maurice (also known as Owen) enlisted with the Bedfordshire Regiment, Regimental number 14608) on 4th September 1914 at Bedford, Bedfordshire.  He was sent to France on 1st May 1915.  On 20th March 1918 he transferred to the 30th Division Signal Corps, Royal Engineers as a Driver, Regimental Number 360462. He saw active service on the Western Front, France and Flanders. In 1918 he was with the 89th Brigade Headquarters Signals.

Maurice survived the War and died in St Albans on 9th November 1957.

Maurice was born in Ashwell, Hertfordshire on 27th February 1897. He was a pupil at the Merchant Taylors School in Ashwell.  On his military enlistment papers he is shown as groom and gardener.  Maurice was often known as Owen.

Maurice married Lily White in Ashwell on 3rd December 1921.  They had one son, Denis Albert George born in Ashwell, Hertfordshire and christened on 23rd February 1927.