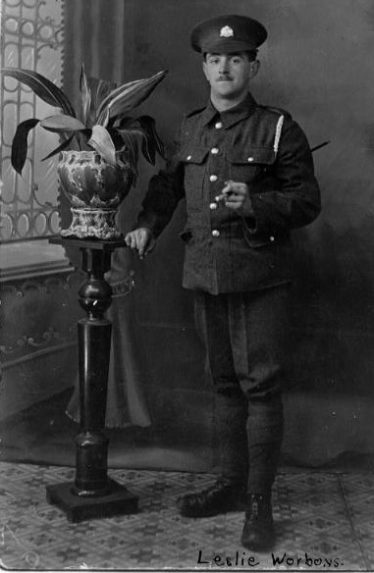 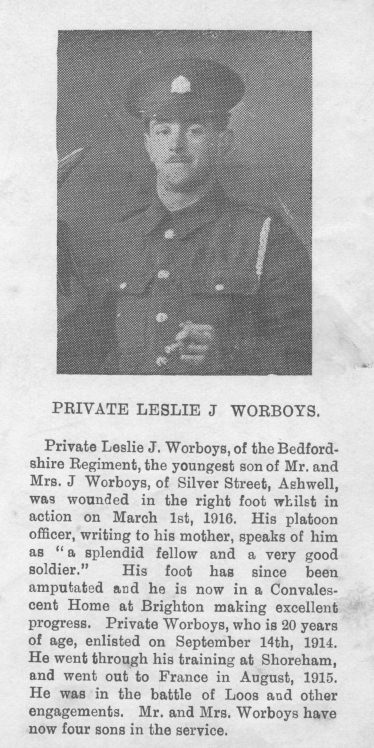 Leslie enlisted with the Bedfordshire Regiment on 15th September 1914. After training at Shoreham he received orders to mobilise on 28th August 1916, reaching Boulogne early on 30th August 1916. In a letter home he referred to his battalion as the ‘Hungry 8th’. They fought in the Battle of Loos in September and in 1916 engaged in The Battle of the Somme (specifically at the Battle of Flers-Courcelette.) where Leslie suffered a gunshot wound to his right foot. In June 1916 his leg was amputated below the knee and he was discharged no longer fit for military duty and so survived the War.

Leslie was awarded the Victory Medal, the British War Medal and the Silver War Badge.

He is commemorated on the St Mary’s Church Ashwell Roll of Honour and buried in Ashwell, Hertfordshire.

Leslie was the sixth son of James and Charlotte (nee Huffer) Worboys born in Ashwell in the 2nd quarter of 1896. Leslie was a pupil at the Merchant Taylors School in Ashwell.

After recovering from his leg amputation he trained as a boot and shoe repairer and opened a shop next door to the Rose and Crown pub in Ashwell High Street.

Four of Leslie’s brothers served in the War and all survived.