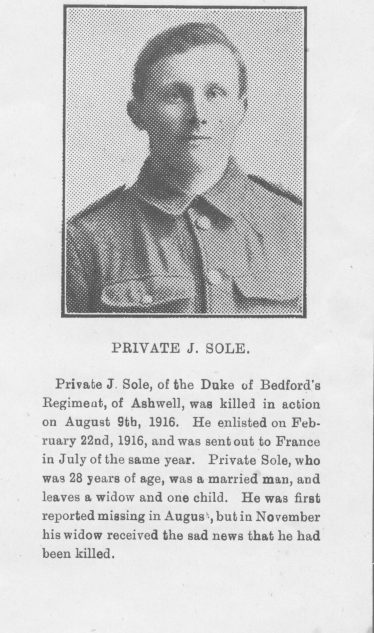 Jonah enlisted on 22nd February 1916.  He served with the 6th Battalion of the Bedfordshire Regiment in the Western European Theatre of War, France and Flanders.  He was killed in action near Bazentin on 9th August 1916.

Jonah was awarded the Victory Medal and the British War Medal.

Jonah is commemorated on Pier and Face 2C of the Thiepval Memorial, France and on the Eyeworth Roll of Honour.

Jonah was born in Campton, Bedfordshire in 1888 and lived in Eyeworth, Bedfordshire.  He was the second son of George and Amelia (nee Gregory).

Jonah married Grace Geeves in 1912 and they had one daughter, also named Grace.

From the Royston Crow September 1916:

Private Jonah Sole had been reported missing to his wife in August. He was 28 and lived at Quarry Cottages, Ashwell but as yet there was no confirmation of his death.