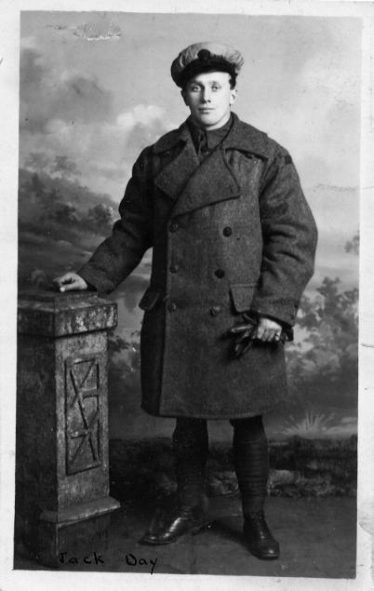 Jack enlisted on 14th July 1915 with the Royal Naval Air Service, Air Mechanic, Regimental Number 6553. He was initially based on the HMS President II which was a shore-based ship which moved to where the personnel were required, firstly in Felixstowe, three months in Dunkirk, then back to England at Folkstone. On 6th July 1917 he transferred to the Royal Air Force, Regimental Number 205530, and was stationed at the Wormwood Scrubs airship station for a few months. In August 1918 Jack joined the Observation Section stationed in Great Yarmouth and Purfleet before being discharged on 30th April 1920. Jack survived the war but it is not known when he died.

Jack was awarded the British War Medal and the Victory Medal.

Jack was born in Ashwell, Hertfordshire on 6th April 1890, the sixth son of Leopold and Mary Ann Elizabeth (nee Bonfield) Day. He was a pupil at the Merchant Taylors School in Ashwell.  Jack helped in the family bakery in Ashwell, but his military records list him as a farmer.

It is not known if Jack married or had children, nor is it known when he died.

Jack’s brothers Harry, Cyril, and Edward served in the War and survived.  Arthur was killed in action at Abbeville on the Somme.