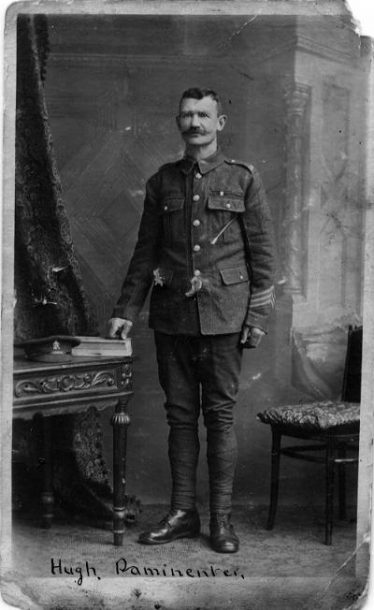 Hugh enlisted at Hitchin with the 8th Hussars on 30 December 1891. In his short attestation records Hugh states that he had belonged to the 4th Battalion Bedfordshire Regiment and that he had been discharged. He deserted on 3rd May 1892 but re-joined in 1898 and was court martialled and imprisoned six weeks. He returned home until his re-engagement on 13th February 1900 when he was sent to South Africa to fight in the Boer War until 27th March 1903. Hugh then returned home and joined the Army Reserved until 29th October 1913 when he enlisted with the Royal Defence Corps. Garrison battalions were composed of soldiers either too old or medically unfit for active front-line service. The role of the corps was to provide troops for security and guard duties inside the United Kingdom. Hugh survived the War and died at Ashwell, Hertfordshire in 3rd quarter 1937.

Hugh was awarded the South African War Medal with clasps 1901 and 1902, the British War Medal and the Victory Medal.

Hugh was the eldest son (eighth child) of Amos and Jane (nee Covington) Pammenter, born in Ashwell, Hertfordshire in the 4th quarter 1871. Hugh was a pupil at the Merchant Taylors School in Ashwell. When not in the army he was a labourer.