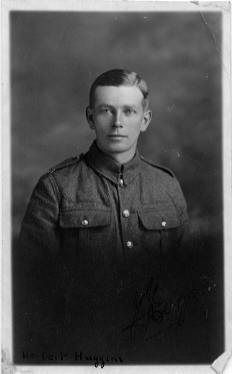 Herbert enlisted on 30th June 1916 and joined the Royal Irish Fusiliers, Regimental Number 45030.  He was sent to the Western Front, France and Flanders where in January 1917 he received a shrapnel injury. He recovered and in 1918 transferred to the Royal Irish Regiment, Regimental Number 41197. Herbert survived and died at Barnard Hill, London, UK on 17th March 1968.

Herbert was awarded the British War Medal and the Victory Medal.

He is commemorated on the Mary’s Church Ashwell Roll of Honour.

Herbert was the fourth son of Charles and Marianne (nee Hemmings) Huggins, born in the 2nd quarter of 1884 at Abingdon, Berkshire. The family moved to Ashwell, Hertfordshire in about 1888 and Herbert attended the Merchant Taylor School there.

Before enlisting Herbert was a clerk at the Page’s Brewery in Ashwell. He was a keen footballer and was captain of the Ashwell team.

Herbert married Nellie Bailey in the 3rd quarter of 1908 at Ashwell, Hertfordshire. They had four children, two of whom, twins died in infancy, Kenneth Herbert born in the first quarter 1909 and Mary born in the third quarter of 1913.

Herbert’s son Kenneth was a civil servant and part of the British War Materials Mission to Washington, DC, USA in 1943.  He went on to become the Consul-General in Johannesburg, South Africa in 1962.