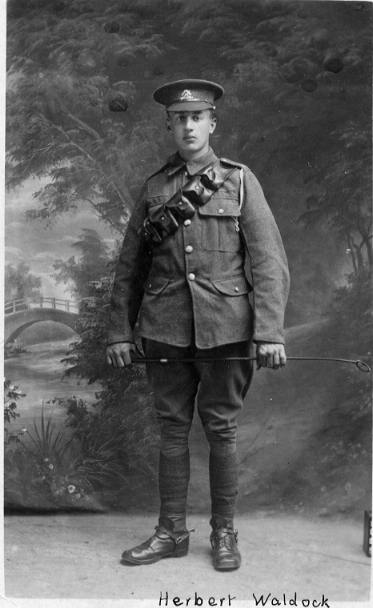 Regiment:
Household Cavalry and Cavalry of the Line

Herbert served with the 9th Lancers of the Household Cavalry and Cavalry of Line in the Western European Theatre of War, France and Flanders. He was seriously wounded in August 1918 and honourably discharged on 12th May 1919 “being no longer physically fit for war service.”

Herbert was awarded the 1914/15 Star, the Victory Medal, and the British War Medal.  He was also awarded the Silver War Badge for wounds received in battle.  Herbert survived the War but died of his wounds on 23rd August 1923.

He is buried in the St Mary’s Churchyard, Ashwell, Hertfordshire and commemorated on the Ashwell War Memorial.

Herbert was the second son of Benjamin John and Agnetta (nee Covington) Waldock of Ashwell. He was a pupil at the Merchant Taylors School in Ashwell and before enlisting he was a baker in Shefford, Bedfordshire.

Herbert died on 23 August 1923 at the military hospital, The Queen Alexandra Hospital in Roehampton, (before 1919 it was known as Gifford House) from wounds received in battle. Herbert was buried with his mother, Agnetta who died in 1907. The inscription on the headstone reads: “…died August 23rd 1923 aged 29 years…memorial is erected in remembrance by his comrades [at] the Queen Alexandra [Hospital Home].”

Further information on the subject of ‘George Waldock’ mentioned in last month’s column has come from Kathy Ferguson whose great uncle was Herbert George Waldock.

Kathy Ferguson goes on to explain that both the ‘H. Waldocks’ mentioned are buried in the churchyard. Herbert George, my served with the 9th Lancers on the western front from August 1915 until he was seriously wounded in August 1918. He is buried with his mother Agneta. The inscription on the headstone reads: “…died August 23rd 1923 aged 29 years…memorial is erected in remembrance by his comrades [at] the Queen Alexandra [Hospital Home].” The QAHH still operates today.