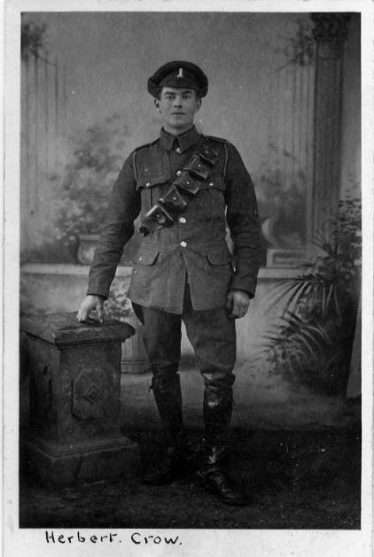 Regiment:
Household Cavalry and Cavalry of the Line

Herbert enlisted with the Household Cavalry and Cavalry of the Line (14th King’s Hussars) towards the end of 1914 but later transferred to the 11th Prince Albert’s Own Hussars and served in France.

Herbert survived the war and died in Chelmsford district in 1957.

Herbert was awarded the 1914 Star, the Victory Medal and the British War Medal.

Herbert was born in the 2nd quarter of 1895, the eldest son of Thomas and Mary Magdalene (nee Brown) Crow at Great Leighs, near Braintree, Essex.

Herbert’s family appeared to have lived in many places over the years but they lived in Ashwell for a time. Herbert was a pupil at the Merchant Taylor School in Ashwell, Hertfordshire and his brother Ernest was born there.

Herbert was recorded as a carman for a carting contractor on the 1911 census.

It is not known if Herbert married.

He died in the Chelmsford district in 1957.