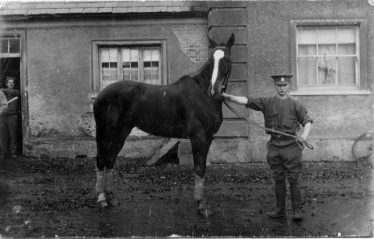 Nothing is known of Harry’s military history except that he enlisted in August 1914.  He saw active service in the War and survived.  He died in the Aylesbury district in the 4th quarter 1969.

Harry was the third son of Charles and Mary Jane (nee Winter) Wilkins, born at Ashwell, Hertfordshire on 16th June 1893.  He was a pupil at the Merchant Taylors School in Ashwell. The 1911 census shows him working, alongside his brother Arthur, on the Castle Fields estate in Buckingham, Buckinghamshire.

The 1939 census shows Harry as a bricklayer living with his family in the Thornborough area of Buckinghamshire.

Harry died in the 4th quarter 1969 in the Aylesbury district, Buckinghamshire.

Harry’s brother Percy was killed in action on the Western Front during WWI. His brother Prime Frederick died aged 17 in 1908 at Ashwell, Hertfordshire. His brothers Albert Pretoria and Arthur William both served in WWI and survived.