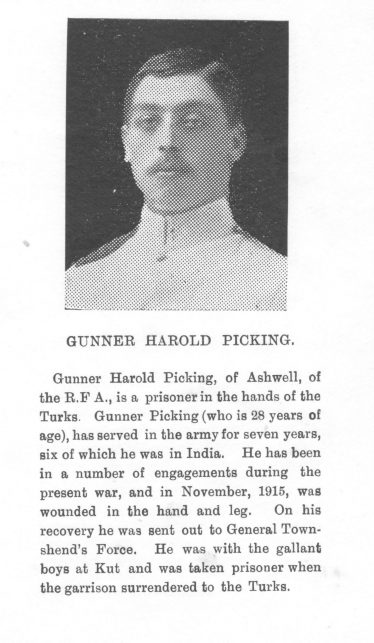 Harold enlisted with the army on 24th March 1909. He served in India under General Townshend until early 1915 when he was wounded in the hand and leg. During his convalescence the garrison moved to the Asian Theatre of War, Mesopotamia, Basra. After recovering from his injuries Harold re-joined General Townshend’s British-Indian garrison in the Siege of Kut Al Amara which started on 7th December 1915. After 162 days of near starvation and severe hardship the garrison surrendered to the Turks and all soldiers were taken prisoner, including Harold. Harold survived the War.

Harold died at Ashwell, Hertfordshire in June 1964 and is buried in the Ashwell cemetery.

Harold was the second son of John and Caroline (nee Waldock) Picking born in the 4th quarter 1888 at Ashwell, Hertfordshire.  Harold’s parents both died before he was ten and he went to live with relatives in the village. He was a pupil of the Merchant Taylors School in Ashwell.

Harold died at Ashwell, Hertfordshire in June 1964 and is buried in the Ashwell cemetery.

Harold’s brother John also served in the War and survived.