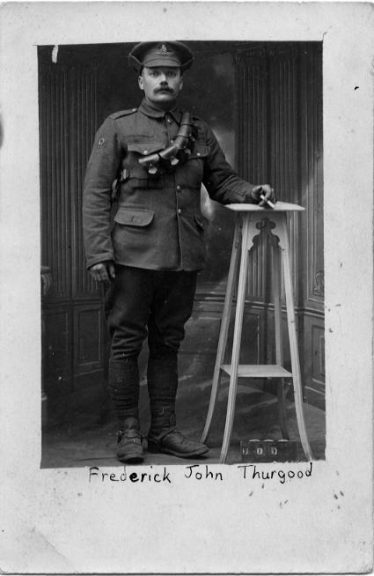 Frederick enlisted with the Army Service Corps on 9th November 1914, Regimental Number 90442 as a shoeing smith.  He transferred to the Royal Field Artillery, Regimental Number 4410 on 21st December 1914 where he served with the 2nd Reserve Battalion and the 4th Reserve Battalion.  On 12th January 1915 he joined the RFA Expeditionary Force and was sent to the Western Front, France and Flanders with the 7th Division Divisional Ammunition Column.  There is also reference in his military records to Italy but nothing specific is known about this.

Frederick survived the War and he died on 21st May 1951 at The Queen Victoria Memorial Hospital Welwyn, Hertfordshire.

Frederick was awarded the 14/15 Star, the British War Medal and the Victory Medal.

Frederick was the only son of Edwin John and Fanny (nee Hall) Thurgood, born at Ashwell, Hertfordshire in the 4th quarter 1917. He was a pupil at the Merchant Taylors School in Ashwell. Before enlisting Frederick was a blacksmith.

Frederick married Nellie Keturah Lucas in the 3rd quarter 1917 at the Parish Church in Newnham. It is not known if they had children.

Frederick died on 21st May 1951 at The Queen Victoria Memorial Hospital Welwyn, Hertfordshire.