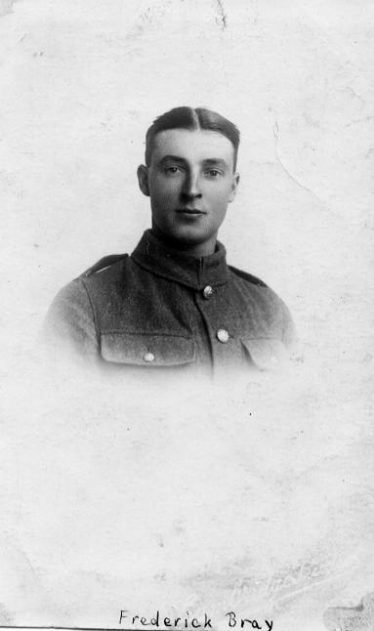 Fred enlisted at Bedford on 16th November 1915 with the Bedfordshire Regiment, Regimental Number 26217. The Regiment landed at Le Havre on 25th July 1916 and went straight to the front line on the Somme.  Fred survived the War and returned to Ashwell.

Fred was awarded the Victory Medal and the British War Medal.

Fred was born in the third quarter of 1889, the third son of Alfred and Catherine (nee Musson) Bray. He was a pupil of the Merchant Taylors School in Ashwell.

Before enlisting Fred was a builder with FJ Bailey of Ashwell.

Fred married Doris Mary Ann Barker Stafford in the first quarter 1938 in the Hitchin district. It is not known if they had children together.

Fred died on 23rd October 1960 and is buried in the Ashwell United Reformed Church graveyard.

Fred’s brother William served with the Royal Engineers and survived the War.

Fred enlisted with his friends from Ashwell, George Bryant and John Oyston.  The Regiment landed at Le Havre on 25th July 1916 and went straight to the front line on the Somme.  George was killed in an assault on the village of Beaucourt during the Battle of the Somme.  The attack began at 06.00am in pitch darkness as well as thick fog which lasted most of the day.  Although surprised by the attack the German dugouts and machine gun positions were not effectively dealt with and many casualties were sustained as a result of heavy rifle and machine gun fire.  The battalion suffered 194 casualties in the action.  Beaucourt was not taken until the following day. Fred and John survived the War.