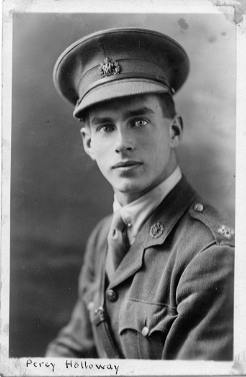 Percy enlisted on 1st September 1914 with the Royal Fusiliers, Regimental number 498.  He was sent to the Western Front, France on 12th November 1915 and served with the 19th Battalion where he was promoted to Corporal.  He was recommended for a commission on 25th September 1916 and returned to England where he took the aviation training examinations.  He earned his wings, transferred to the Royal Flying Corps, the aviation branch of the army, keeping his Regimental Number 498, and rose to the rank of Lieutenant.

Percy wrote many letters home and to Mr Chote (the schoolmaster at Merchant Taylors School) and told that in 1916 he had met another Ashwell man, Billy Picking, while on his way to the trenches. Percy caused quite a stir in Ashwell in 1917 when he flew in for a quick visit and landed his plane near the village, gathering a crowd of spectators.

Percy survived the war but it is not known when he died.

He was awarded the 1915 Star, the British War Medal and the Victory Medal.

Percy was born in Ashwell, Hertfordshire on 28th June 1895, 5th son of Henry and Susan (nee Pratt) Holloway.  He was a pupil at the Merchant Taylors School in Ashwell.  The 1911 census shows him as a local delivery postman.

It is not known if Percy married or had children.