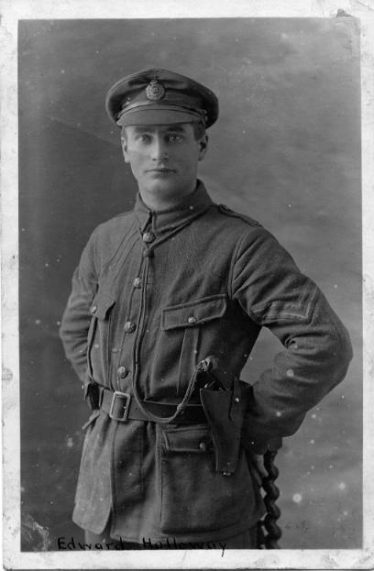 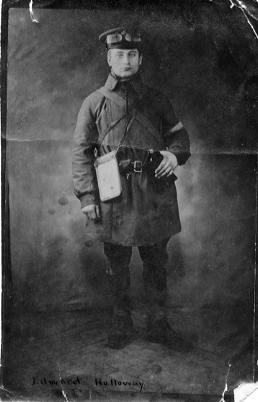 Edward enlisted with the Royal Engineers Signals Battery, Regimental Number 27854, on 9th August 1914. He served as a Dispatch Rider with the Motor Cycle Corps. In 1917 he was travelling at 30mph when a tyre came off his motorcycle causing him to crash and he lost a finger. After recovering he returned to his regiment.

Edward survived the war but it is not known when he died.

Edward was awarded the 1914 Star, the British War Medal and the Victory Medal.

Edward was the fourth son of Henry and Susan (nee Pratt) Holloway, born in London in 1886. The family were living in Steeple Morden, Cambridgeshire in 1891 and by 1901 had moved to Ashwell, Hertfordshire. Edward was a pupil at the Merchant Taylors School in Ashwell. Henry was a tailor in the village.

Before enlisting Edward worked as a tailor in his father’s shop in Ashwell, Hertfordshire. After the War Edward returned to Ashwell and was often seen sitting in his shop window, cross-legged, sewing a garment.

It is not known if Edward married or had children.