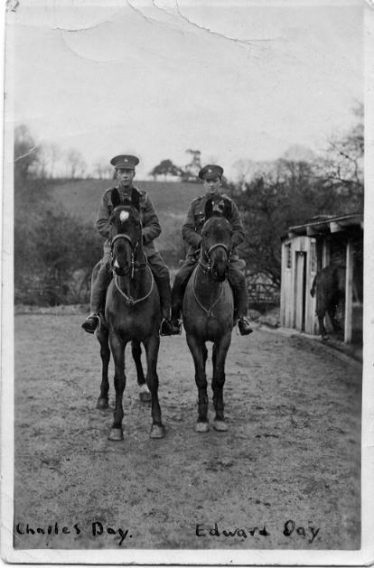 Edward enlisted with the 3/1st Reserve Hertfordshire Yeomanry division of the Household Cavalry on 20th November 1915, Regimental Number 2880. He and his nephew, Charles Leopold, signed up together at Hertford, Hertfordshire.  In June 1917 Edward and Charles were transferred to the 6th Reserve Battalion, Regimental Number 106044.  On 27th November 1917 Edward embarked for the Asian Theatre of War, Mesopotamia and Persia, to Basrah where in March 1918 he saw active service in the Ramadi Battles. In July 1918 Edward contracted a recurring fever and he was evacuated to hospital in Calcutta, India via a Field Ambulance in Persia. Edward was discharged on 23rd October 1919.  He survived the War but it is not known when he died.

Edward was awarded the British War Medal and the Victory Medal.

Edward was born in Ashwell, Hertfordshire on 16th December 1896, the 9th son of Leopold and Annie Maria Elizabeth (nee Bonfield) Day. He was a pupil at the Merchant Taylors School in Ashwell. Before enlisting he was a clerk assisting in the family bakery.

It is not known if Edward married or had children.

Edward’s brothers Jack, Harry and Cyril all served in the War and survived.  Arthur was killed in action at Abbeville on the Somme.