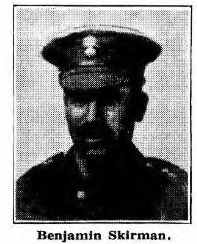 Benjamin enlisted with the Royal Fusiliers, City of London Regiment, 7th (Extra Reserve) Battalion on 11 December 1915. He served with the Expeditionary Force in France and Flanders in the Arras Offensive where he was killed in action on 23 April 1917.

He is commemorated on the Arras Memorial, Departement du Pas-de-Calais, France and the Ashwell Church Roll of Honour.

Benjamin was born in Ashwell, 2nd son of Frederick and Hannah (nee Barlow) Skirman on 30 October 1877. He had been a pupil at the Merchant Taylors School in Ashwell.  He was a milkman.

Benjamin died on 23 April 1917 in the Arras Offensive in France. He was the last surviving of five sons.