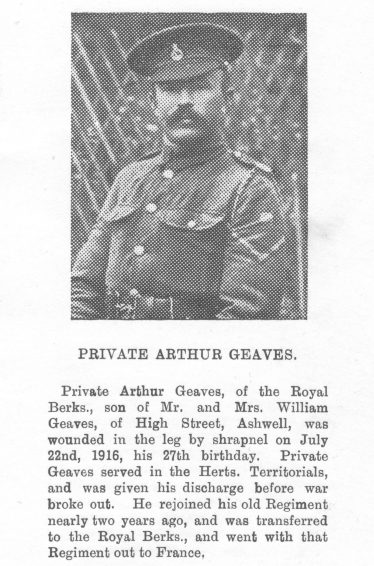 Arthur enlisted initially with the Hertfordshire Regiment Territorials, 3/1 Battalion, Regimental Number 2676. When War broke out he joined the Princess Charlotte of Wales (Royal Berkshire) Regiment 2/4 Battalion, Regimental Numbers 6653 and 202564 in October 1914. The 2/4 Battalion was mobilised for war in May 1915 and Arthur saw active service in the Western European Theatre of War, France and Flanders.  He was wounded in the leg by shrapnel but survived the war and settled in Sandy Bedfordshire.

Arthur was awarded the Victory Medal and the British War Medal.

Arthur Albert, also known as Albert Arthur, was born in Buckland, Hertfordshire in September 1889, fourth son of William and Mary Ann (nee Hatchett).  Arthur was a pupil at the Merchant Taylors School in Ashwell, Hertfordshire.

Before enlisting Arthur was a farm labourer living in Ashwell.

He married Evelyn Copley in the third quarter of 1917 at Keighley, West Yorkshire (West Riding) and they had four children.  Edna Muriel was born in June 1920, Leslie E born in March 1924 but died aged 11 in December 1935, Alma E and Graham A both born in March 1925.