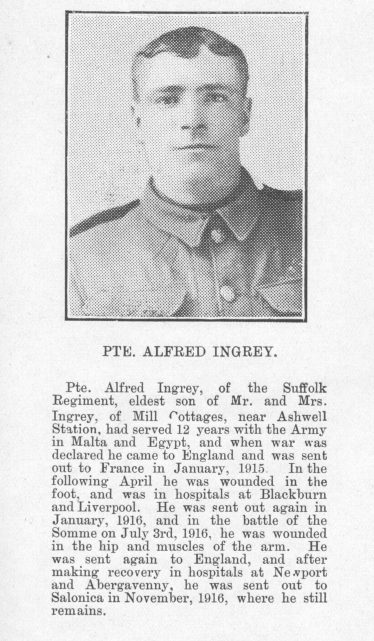 Alfred enlisted with the 1st Suffolk Regiment on 23rd November 1906, Regimental Number 7450. The Battalion was on garrison duty in Khartoum, Sudan when War was declared. On 15th January 1915 Alfred’s battalion moved to France. He saw active service on the Western Front where, on 4th July 1916, he was wounded in the foot. After recuperating in England he was again sent to France and again was wounded, this time in the hip and leg. Alfred spent time in a hospital in Wales recuperating and in November 1915 was sent to Salonika where he remained until the end of the War.

After the War Alfred transferred to the 7th Battalion, Regimental Number 5819188, and was posted to India. It is thought he left the army in about 1924.

Alfred was awarded the 1914-15 Star, the British War Medal, the Victory Medal and the Indian General Service Medal with clasp.

Alfred was the eldest son of Alfred John and Hannah (nee Chamberlain) Burton, born on 21st January 1889 at Bassingbourn, Cambridgeshire. He was a pupil at the Merchant Taylors School in Ashwell, Hertfordshire.

Alfred married Ada Emily Tullett at Colchester in the 3rd quarter 1927.  They had one son, Geoffrey Charles, born in Ashwell, Hertfordshire on 25th November 1927.

Alfred’s brothers, Albert, William and Harry all served in the War, all were wounded, but all survived.